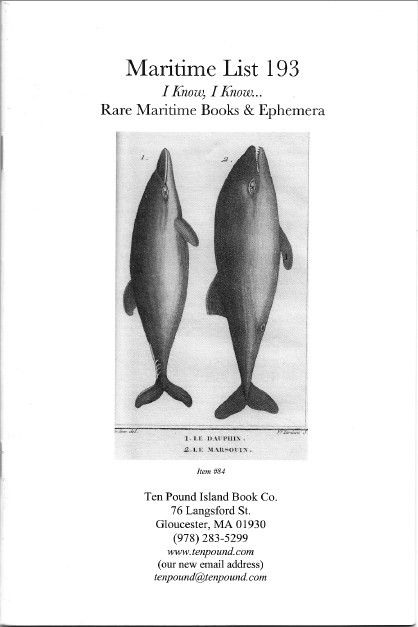 Ten Pound Island Book Company has issued its Maritime List 193, subtitled I Know, I Know... That strange title is easily explainable if you saw their last catalogue. In it, owner Greg Gibson announced that it would be their last printed catalogue. Production costs no longer justified sales, so as a result, there would be no more, only internet catalogues. That was three months ago. Now, Ten Pound is tacking 180 degrees starboard, or whatever it is nauticians say when they make a U-turn. If Mr. Gibson ever retires from bookselling, I foresee a wonderful career in politics. So here are some selections from whatever that catalogue is called which comes after the final one.

Item 27 is a humanitarian exception from the War of 1812. The U.S. had no navy to speak of to counter British shipping. To make up for it, the government licensed private ships to harass British shipping and confiscate their cargoes. This piracy with a license was known as privateering. However, two exceptions were made, and item 27 is one of those. Headed Additional Instruction, it is a broadside stating that public and private vessels of the U.S. "are not to interrupt any British unarmed vessels bound to Sable Island, and laden with supplies for the humane establishment at that place." It came by command of the President, though it is signed (in print) by Secretary of State James Monroe. Sable Island is a small Atlantic Island off the coast of Nova Scotia. The British had opened up a life saving station there as shipwrecks were numerous in the area. Scouts would scour the beach for survivors while providing food and medical care for them until irregularly arriving vessels could provide rescue. Evidently, President Madison considered this a sufficiently worthy cause to protect those who supplied the island. The life saving station was closed about half a century ago, and Sable Island is now noted more for its wild horses and scientific observatory. Priced at $950.

Item 1 is a useful book, A Vocabulary of Sea Phrases and Terms of Art Used in Seamanship... by "A Captain of the British Navy." We presume this is a book of terms like "keel" and "jib," rather than the four-letter varieties sailors are noted for speaking. Published in 1799. $500.

It makes sense to be firm, even tough on crime, but sometimes we can go a bit overboard, to use another nautical expression. Item 68 consists of two manuscript letters and a petition from one John Russell in 1835. The Englishman Russell had been sentenced to transportation, that is, exile in the penal colony in Australia. It was a long arduous trip followed a life sentence of isolation on the other side of the world. Russell's high crimes? He stole a fruit pie and two dishes. Russell's two letters were written to his mother and father, where he seeks their help in obtaining clemency. He points out that he is of good character, had no previous criminal record, and he thought the pie incident was part of a joke being played on a friend. His pleas were to no avail. Mr. Russell was transported. $1,750.