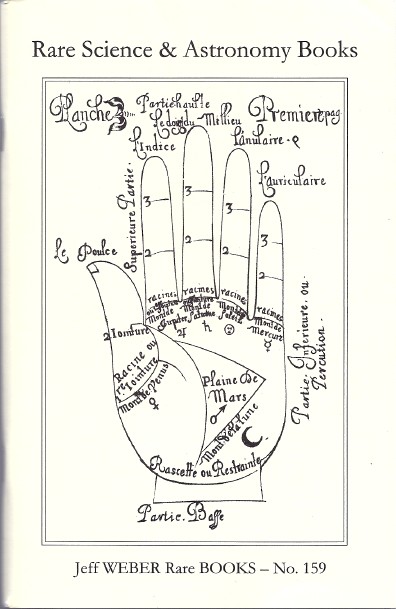 This month we received our first catalogue from Jeff Weber Rare Books of Glendale, California. This is number 159 in their series, titled Rare Science and Astronomy Books. Weber specializes in science, and while this particular catalogue is focused on astronomy, others feature different topics within the field. Some of these books will be rather technical, while others are aimed more at the layman looking to expand his/her horizons. There is an enormous amount of knowledge and discovery in this catalogue - 418 tomes on the latest information of the day, though that day may range from a few years past to centuries ago. These are some samples of the material you will find.

While the names of many of the scientists who have contributed to this catalogue are not well known outside of their fields, we will start with the great work of a man everyone knows: Charles Darwin. Darwin, of course, came up with the explanation as to how the various species of plants and animals got to where they are today, a theory most controversial as it conflicted with many deeply held preconceived notions. Item 76 is a copy of the first American edition, published in 1860, of his earth shattering book On the Origin of Species by means of Natural Selection. Many regard this as the most important scientific work of the 19th century. It had already proven to be an instantaneous top seller by the time the American edition came out, only a few short months after the first edition. Priced at $5,000.

As big a selling success as the Origin was, here is a Darwin title that sold even faster than that one: The formation of vegetable mould, through the action of worms with observations on their habits. That doesn't sound like it would be more popular, though it was certainly less controversial. It was his last scientific book and the last work published during his lifetime. Darwin had joked about going to join the worms about which he wrote. Actually, he had been fascinated by the creatures for decades, having first written about them long before he conceived the Origin. This book provided the summary of his learning about these animals he considered exceedingly important to the environment, and at least semi-intelligent. Item 75. Published in 1882. $150.

Somewhat forgotten along the way is that Darwin did not publish the first paper on evolution, at least not on his own. Darwin developed the theory first in the early 1840s, but sat on it, somewhat fearful of public reaction. In the 1850s, Alfred Russel Wallace developed a theory of evolution very similar to Darwin's separately. It was on hearing from Wallace that Darwin realized he must finally publish his theories or be left behind. The result was that he and Wallace published the first description of their theory jointly in 1858. Item 389 is Wallace's autobiography, published in 1905: My Life: A Record of Events and Opinions. Item 389. $400.