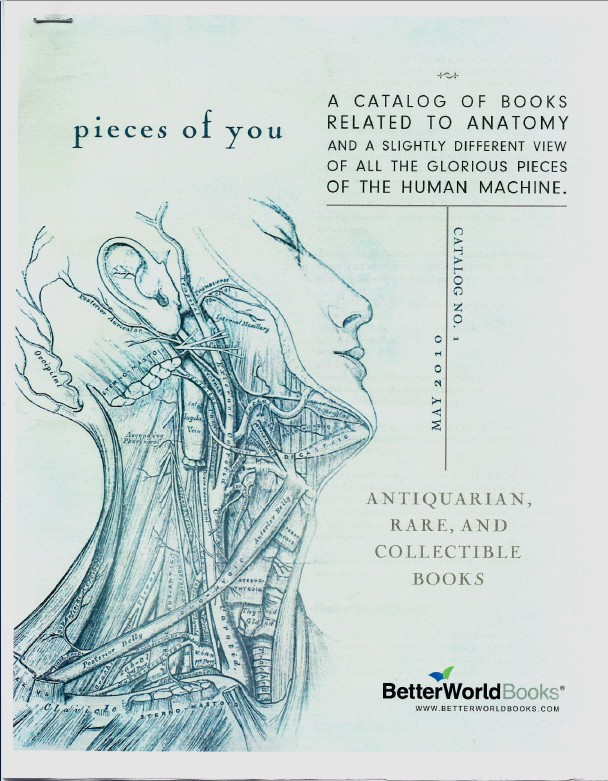 This month we review the first catalogue from Better World Books of Mishawaka, Indiana. Better World is not your typical bookstore. They stock some 6 million books, including 50,000 in their rare, antiquarian and collectible category. Better World is also noted for making substantial donations to literary and similar causes, as well as running an environmentally friendly shop. Not your father's bookstore.

This catalogue comes with the odd title Pieces of You. This is not some metaphorical expression or the like. They mean it literally. This is a catalogue of books dealing with anatomy, primarily human, though a few monkeys, cats, rats, even fleas make their way into its the pages. You can learn all about your various parts, their use, maintenance, repair, even replacement. And while all of these organs, limbs, vessels and such are worthy in their own right, we should all be thankful that, in our case at least, the whole is more than the sum of the parts. Here are some of the books being offered.

We will start with a man who could logically be called the father of anatomy. He lived in second century Rome, and although he never cut any humans open (it wasn't allowed, so he dissected monkeys), he remained the authority in the field for around 1300 years. That gives you an idea of the rate of progress during the Middle Ages. It wasn't until Vesalius began cutting open humans in the 16th century that anatomy again moved forward. Offered is a copy of Galen: On The Usefulness of The Parts of the Body, and though not published until 1968, some 1,700+ years after Galen died, it is a first of sorts. It is the first English edition translated directly from the original Greek. Priced at $50.

The most expensive book in this catalogue, and rightfully so, is an inscribed copy of Descriptive Zoopraxography Or the Science of Animal Locomotion, by Eadweard Muybridge. Muybridge was a noted photographer of animals in motion, creating a precursor to motion pictures. He would take numerous pictures of a moving animal split seconds apart. He used this process to answer an old question, "do all four of a horse's feet come off the ground at once when running?" (answer: yes). Muybridge developed a device for spinning through still photographs rapidly to create the illusion of motion, something akin to the process of motion films. This copy of Muybridge's 1893 book is inscribed to Dr. Henry Pickering Bowditch, a Dean of the Harvard Medical School who studied movement of the human body. $3,000.

The Surgical Treatment of Chronic Suppuration of the Middle Ear and Mastoid is a 1906 treatise on hearing by Dr. Seymour Oppenheimer. Better World notes that when "your child claims that he didn't hear you, you may wish to show him some of these surgical methods to improve his hearing." $40.

It gets worse. Much Worse. Next is A Treatise on Diseases of the Rectum, Anus, and Sigmoid Flexure, courtesy of one Joseph M. Matthews in 1893. Better World points out, "Things with points, hooks, or which use electricity shouldn't have anything to do with this part of your body." Amen. For those looking for a scary book to read, truth can be scarier than fiction. $70.