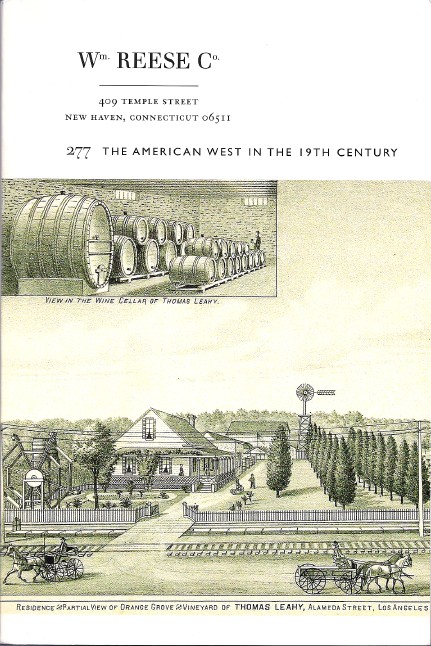 The William Reese Company has released its 277th catalogue issued over the past 30 years, The American West in the 19th Century. This is made up entirely of material obtained during the past year, since Reese offered their last all-Western catalogue. It is filled with accounts of explorations, from the official ones such as Lewis and Clark or Zebulon Pike, to individual accounts of overland settlers or those who sailed around the Horn. Some are printed accounts, others are journals or letters back home. Some of these books provide early illustrations of the West, including Indian leaders in the days when they fought to retain their independence. Other books provide maps of the West as best they knew it at the time. Here are some of these works pertaining to America's West when it was still the frontier.

Item 192 is the first printed account of a journey across the plains to Oregon. Published in 1833, it is John Wyeth's account of an 1832 journey, Oregon; or a Short History of a Long Journey from the Atlantic Ocean to the Region of the Pacific, by Land... Wyeth, just 18 at the time, hooked up with a group led by his ambitious cousin Nathaniel Wyeth. The latter believed he could make money in a field recently abandoned by John Jacob Astor, the fur trade. Nathaniel never made such a fortune, but he did make it to Oregon. Not so John. His young cousin, and several other men, threw in the towel trying to cross the Rockies in Idaho, John Wyeth being the only one to return all the way to their Boston starting point. His book (probably written for him by Benjamin Waterhouse) describes the insanity of attempting to settle Oregon and expresses his grievances with his cousin. Priced at $17,500.

In the 1840s and 50s, thousands took to the trails to make the arduous journey to Oregon. Others manned ships that sailed the dangerous currents around the Horn to get to California for the Gold Rush. However, visionaries of the time realized there had to be a better way, and they began mapping out plans for a Pacific railway. By the 1850s, the federal government was deeply involved in this project. Item 135 is a copy of the Senate issue of the Reports of the Explorations and Surveys, to Ascertain the Most Practicable and Economical Route for a Railroad from the Mississippi River to the Pacific Ocean. This thorough report consists of 12 volumes covering everything from the geography of the area to its natural history. It also contains one of the most important maps of the west up to that time. The volumes were published from 1855-1860 under the auspices of the Secretary of War, who at the start was Jefferson Davis, later President of the rebellious Confederacy. Item 135. $12,500.

In the early days Los Angeles was known for agriculture, not movie stars. Item 23 is the History of Los Angeles County California... as of 1880. This is not just a history but a directory of the county filled with illustrations of businesses and buildings, along with fruit trees and farms. A couple of those illustrations are seen on the cover of this catalogue. $4,250.