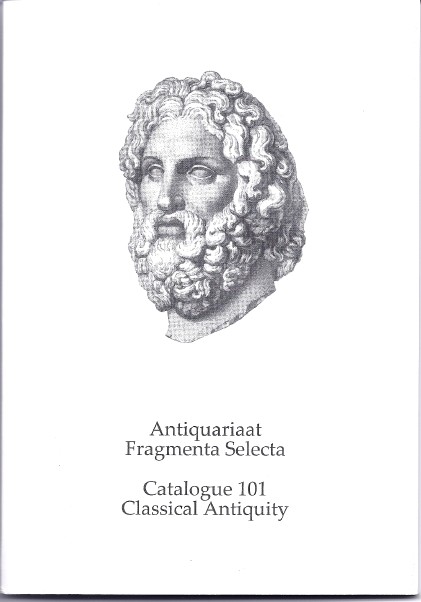 Antiquariaat Fragmenta Selecta has released their Catalogue 101 Classical Antiquity. While these are not primarily antiquarian books, they are the books of antiquity. By "classical antiquity," they are referring to the periods of the Greek and Roman Empires, along with the Byzantine Era, which takes us up to the end of the Middle Ages, and, of course, the invention of printing. There are no books from classical antiquity, at least not printed ones, and surviving manuscripts from these times range from nonexistent to very rare. Most of what we know of these times comes from copies of copies, made by scribes long ago from originals or earlier copies long since lost. Their accuracy may not always be perfect, but this is the best available source of the history and knowledge of our ancestors many generations removed. Antiquariaat Fragmenta Selecta offers over 1,200 titles in their latest catalogue, valuable for research, learning, entertainment, and collecting. Those were the days.

Item 1078 is a later reprint of an 1891 look at one of the earliest archeologists of ancient Greece: Schliemann's Discoveries of the Ancient World, by Karl Schuchhardt. Heinrich Schliemann was not really an archeologist by today's standards. Then again, neither was anyone else in the 19th century. Schliemann was a German businessman who made a fortune in Gold Rush California, sold it and made another one in Russia. With more than enough money to live happily ever after, he devoted the remainder of his life to excavating ancient ruins, looking to establish his belief that ancient Greek writings were based on historical fact. He uncovered many artifacts in an area he correctly identified as the site of ancient Troy, though his sometimes less than careful excavations may have destroyed other evidence and confused the dating of things he found. Priced at €35 (euros, or roughly $43 in U.S. dollars).

Item 1077 is a more recent book (1991) about the aforementioned excavator: The Gold of Troy. The Story of Heinrich Schliemann and the Buried Cities of Ancient Greece, by Robert Payne. €7 (US $9).

Item 222 is a fictional account of travels in ancient Greece, not that even the more accurate accounts of this time don't contain much fiction. The title of this, at the time very popular book by Jean Jacques Bathelemy, is Voyage du Jeune Anacharsis en Grece, a fictional 4th century B.C. account of the travels of a descendant of Anacharsis in Greece. Anacharsis is a historical figure from the 6th century B.C., though none of his writings survive and he is known only through later accounts and supposed letters he wrote. Anacharsis came from Scythia, along the Black Sea, to explore Athens, and learn from and make friends with its people. He came to be regarded by the Greeks as something of a philosopher, a man of simple tastes who preached friendship and moderation in all activities. Offered is a set of the five-volume 1834 edition of the historical novel first published in 1778, which did much to stir interest in ancient Greece at the time. €125 (US $153).

Item 922 is the catalogue for the auction of the letters of one of the men who did much to spread the modern knowledge that closed out the Byzantine Era and classic antiquity. Abraham Ortelius was the first of the great Dutch mapmakers. His atlases provided maps of the various lands of the world as accurately as possible based on explorations of the 15th and 16th centuries. The collection consisted of 376 letters, mostly sent to Ortelius, but 32 sent by him. The letters were given by Ortelius' nephew to the Dutch Church in London in the early 17th century. In 1955, the collection was put up for auction at Sotheby's, and offered is the catalogue from that sale, Catalogue of the Highly Important Correspondence of Abraham Ortelius (1528-98). The letters would come back to Sotheby's for a second auction in 1968 and are now dispersed, most in libraries. €45 (US $55).

Aristoxenus may have been as great a philosopher as the far better known Aristotle, but it is unlikely we will ever know. Despite being a prolific writer, virtually all of his works are lost. Aristoxenus was a student of Aristotle, and he wrote in much the same philosophical vein based on the titles of his lost works. However, he also wrote about music, and this is where his one text survives. Item 179 is a 1902 translation of his fragmentary survival, The Harmonics of Aristoxenus. €70 US $86).