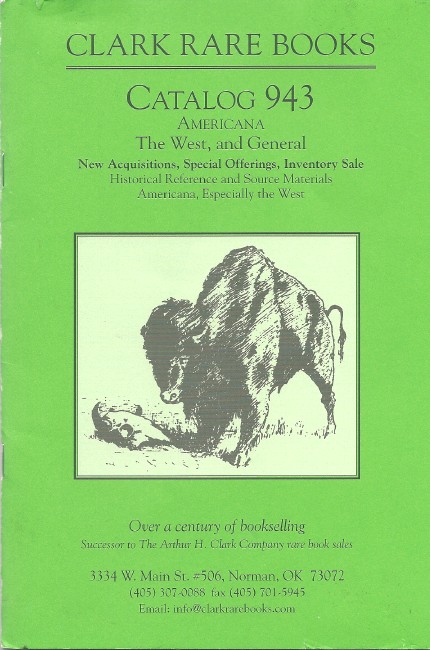 Clark Rare Books has released Catalog 943 of Americana, The West, and General. The American West is the primary focus of this catalogue, but there are exceptions. Admiral Richard Byrd, who makes an appearance, was noted for his missions to the very far north and south, not west. Still, this is a catalogue for collectors and readers whose interests run to the land west of the Mississippi.

While most of what is offered is old books, Clark maintains a relationship with Arthur H. Clark publishing and the University of Oklahoma Press, so they also present a few new items about the Old West. Item 1 is Will Bagley's So Rugged and Mountainous: Blazing the Trails to Oregon and California, 1812-1848, published this year. Bagley has used extensive research of primary materials such as personal letters, journals, and newspapers to tell the story of the early years of travel along the Oregon Trail. Priced at $45. Item 2 is the collector's edition, one of 50 signed copies. $150.

Most of our accounts focus on the people who moved west. This book tells about the animals and wagons that made the journey. Item 15 is Wagons, Mules and Men: How the Frontier Moved West, by Nick Eggenhofer, published in 1961. $1,200.

Item 124 is an account of a unique battle in the Indian Wars, Charles Collins' Apache Nightmare: The Battle at Cibecue Creek (published 1999). Apaches living along Cibecue Creek in Arizona were under the influence of a medicine man, Nock-ay-det-klinne (one of numerous English spellings of his name). There was fear that the Apache spiritual leader would convince his followers to drive white settlers from the area, so the command at Fort Apache sent some soldiers and Apache scouts, under Col. Eugene Carr, to take him into custody. Nock-ay-det-klinne acquiesced, believing the soldiers would not harm him, but some of his followers followed, and a skirmish erupted. Orders were to kill Nock-ay-det-klinne should an attempt be made to free him, which is what the soldiers did. The result was the only case where Indian scouts ever rebelled against their U.S. Army commanders, joining other Apaches in the battle. Not surprisingly, the story of this incident has generally been told from the point of view of only one side, and many myths about it have been passed around over the years. Collins investigated numerous records and contemporary accounts from both sides to present the most accurate portrayal of the incident, its causes and aftermath, as possible. $26.50.

Item 23 is a defense from a collector of Mormon-related material to charges of theft in the early 1990s. John Hajicek was (and is) evidently a very major collector, owning many first editions of the Book of Mormon along with much in the way of far rarer material. He was accused of stealing a Book of Mormon and a separate, very rare title, from libraries. A group of librarians, along with police from the University of Missouri, stood against him. Hajicek responded with his own evidence, their inability to locate any stolen material in his possession, records that indicated he was far from the scene of the crime when it occurred, and tampering of evidence by a police officer. Eventually, that officer was convicted and Hajicek acquitted. Hajicek believed suspicion fell on him for religious, not evidentiary, reasons. He and the accusing librarians came from different Mormon sects (neither being the major LDS Church in Utah). His beliefs followed the "Strangites," a group that followed James Strang, one of the potential Church leaders after Joseph Smith died (most members of the Church eventually followed Brigham Young). Hajicek's book is entitled "Outrages Beyond All Description": A Historical Analysis of Cultural Intolerance in the Case of the Missing Rare Mormon Books, published in 1995. $34.

The last third of this catalogue consists of items that were offered previously, and have now been marked down 30%. For example, item 209 comes from the previously mentioned Admiral Richard Byrd, Little America: Aerial Exploration in the Antarctic. The Flight to the South Pole. Published in 1930, it recounts Byrd's expedition to the Antarctic and his flight over the South Pole. This is a 1930 first edition signed by the author. Price before discount is $75.