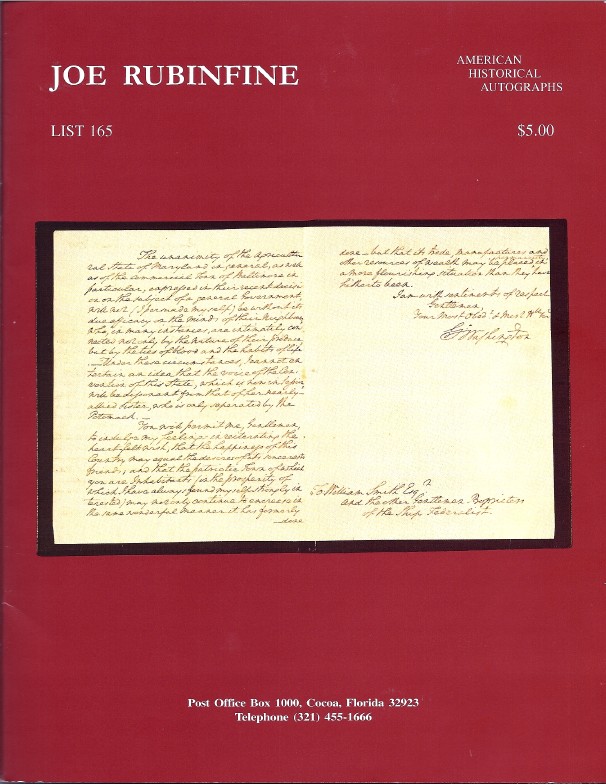 Joe Rubinfine has prepared his List 165 of American Historical Documents. Anyone with a love for American history will greatly appreciate Rubinfine's catalogue. It is filled with documents written by the people who made America's history, from presidents and generals, to someone on the absolute bottom of the nation's social ladder - a slave woman. The documents in this latest collection primarily cover a century in time - from the late 18th to the late 19th century. From Washington and Lincoln to Kitty the slave, they are all here to recall America as they knew it.

For America's first 30 years of independence, the greatest conflict with, and most egregious wrongdoing by its previous colonial master was the impressment of American merchant seamen into the British Navy. Eventually this nefarious practice would be a major cause of the War of 1812, after which England finally abandoned it. British naval vessels would stop American merchant ships and round up anyone they believed to be a British citizen and conscript them into the Royal Navy. Since they considered anyone born in America before independence still a British citizen, this effectively meant that anyone who spoke English was likely to be taken. Item 25 is a January 28, 1801 letter from John Marshall, then Secretary of State, soon to be Chief Justice of the Supreme Court, to David Lenox, U.S. Agent in London for impressed seamen. In it he encloses proofs of citizenship for several American sailors. When America could prove to British authorities that seized seamen were born in America, they would reluctantly let them go. Priced at $7,000.

Item 21 is a 1785 letter from John Jay, future Chief Justice and all around American diplomat, to John Adams, future U.S. President. The topic was the weakness of the federal government under the Articles of Confederation and the need to strengthen it. It may sometimes be forgotten today when talk of the Constitution often represents an argument for a weaker federal government, that it was written to provide for a stronger national government. Writes Jay to fellow supporter of a strong federal government Adams, "Your letters are I am sure useful and inforce those federal ideas which cannot be too forcibly inculcated or too strongly impressed...it is the duty of her leading Characters to cooperate in measures for enlarging and invigorating it" [federal government]. $15,000.

George Washington was also a great supporter of the new constitution, though publicly he said very little. He felt he should adopt the role of neutral statesman, but in private letters, he voiced his strong support. Item 2 is a lengthy 1788 Washington letter to William Smith expressing his thanks to a group which had presented him with a gift, a miniature (15 foot) boat named the Federalist. Washington offers his profuse thanks and recognition of "American ingenuity," and then notes that Smith's Maryland and Baltimore's views "expressed in their recent decision on the subject of a general Government, will not...be without its due efficacy on the Minds of their Neighbors..." Maryland was strongly supportive of the new Constitution and the government it would create, and he was hopeful this would spur similar support among his less enthusiastic fellow Virginians. Ultimately, the Constitution was passed and survives to this day, but the Federalist sunk in a hurricane a few weeks later. Item 2. $150,000.