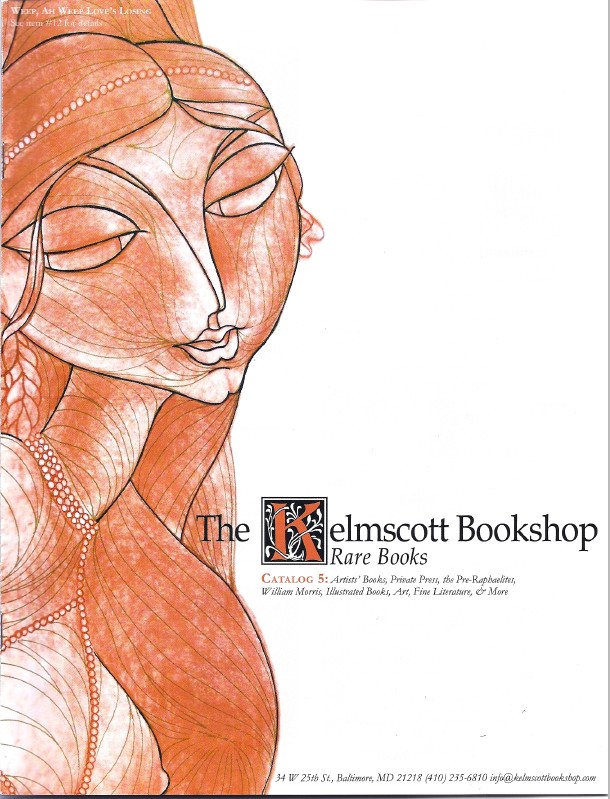 The Kelmscott Bookshop Rare Books has released Catalog 5: Artists' Books, Private Press, the Pre-Raphaelites, William Morris, Illustrated Books, Art, Fine Literature, & More. Always appreciated is a catalogue such as this where the title describes exactly what you can expect to find. The interested collectors will be drawn into its pages, and those with other interests will not needlessly spend their time. Certainly, those who appreciate the art of books will find much to enjoy within this catalogue. Here are a few examples of what to expect.

Item 13 is a tongue-in-cheek alphabet book published by the De Walden Press in 2001. It is number 13 of 49 signed and numbered copies of The Tower of London A to Z. The Tower has a long and often unpleasant history, not exactly the subject for a typical alphabet book. For example, "A" is for Anne Boleyn, one of many of the wives of Henry VIII who did not fare so well. Once the passion of Henry, Anne fell out of favor with the King, first being imprisoned in the Tower, and then taken outside to have her head removed. A foldout page displays an early print of Lady Jane Grey, a claimant to the throne in the years between Henry and Queen Elizabeth, about to have her head chopped off as well. "L" is for the Little Princes Edward and Richard, first and second in line for the throne when their father, Edward IV, died in 1483. Edward, the older, was but 12 years of age, so they were taken to reside in the Tower while his uncle, the Duke of Gloucester, served as protector. However, the uncle decided he should be king himself, so he was coronated Richard III, and the two young princes simply disappeared. No one knows what happened to them, but we all can guess. Jan Kellett's Tower ABC is a miniature book, printed in gold and black and sealed with a leather loop and knot closure. Priced at $445.

Item 57 is The Wildflowers of America, by George L. Goodale, illustrated by Isaac Sprague. Sprague was America's top botanical painter of the second half of the 19th century. However, some of his earliest work was illustrating birds. His illustrations caught the eye of John James Audubon, who took Sprague along on an expedition up the Missouri River in the 1840s. Audubon used some of his drawings, though they were unattributed. Sprague later moved on to more of a focus on botanical specimens, and he illustrated many books, including this one published in 1894, just a year before Sprague died. $300.

Item 19 is a copy of Percy Bysshe Shelley's Zastrozzi: A Romance, published by the Golden Cockerel Press in 1955. Golden Cockerel was one of the most noted of fine presses, this item being published during its latter years (the press operated from 1920-1961). It contains eight wood engravings from Cecil Keeling. This fine press edition was actually the first separate printing of this work, written by Shelley when he was 17, since 1839. $225.