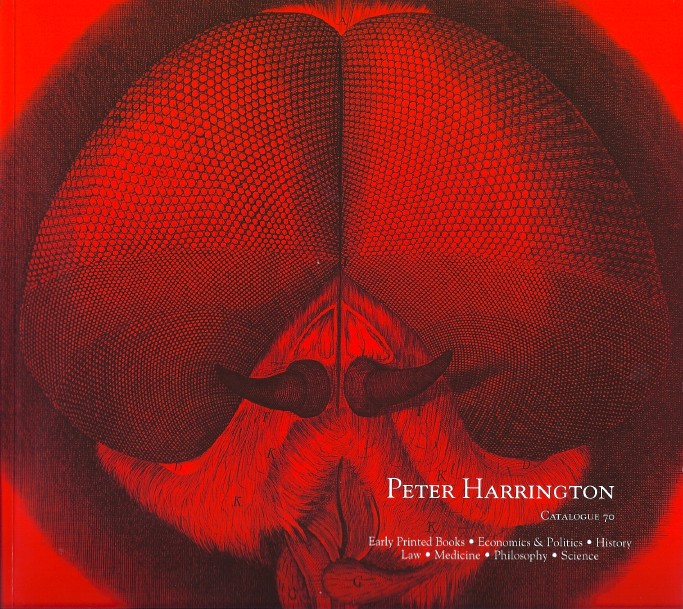 Peter Harrington Antiquarian Bookseller has issued Catalogue 70, a collection of impressive works relating to economics, politics, history, law, medicine, philosophy and science, as well as other early printed books. The catalogue starts with 14 particularly notable "featured items," but the remainder of the 177 items offered are also of more than passing significance. Harrington specializes in important works and this catalogue fits the bill. Here are a few of these books.

Item 4 is a great work, but it is the provenance of this copy that makes it far more remarkable. The book is The French Revolution: a History, by Thomas Carlyle, a first American edition from 1838. Carlyle wrote this book at the urging of John Stuart Mill, after the latter determined he did not have the time to complete such a work himself. Famously, Mill's maid burned the only draft of the first volume, mistaking it for garbage, thereby forcing Carlyle to rewrite it. Carlyle presents a history of that revolution in what was then an unorthodox manner, retelling events more as a participant or witness than traditional historian. This American edition was funded and promoted by a great admirer and friend of Carlyle on the western side of the Pond - Ralph Waldo Emerson. Emerson's promotion of the book made it a success in America, and provided Carlyle with some badly needed financial stability. It was while Emerson was promoting this work that he first met Henry David Thoreau, who would also become a good friend (Emerson was a friendly person). Emerson was something of a mentor, encouraging the young and then unknown Thoreau to write articles for a magazine, Emerson then pressing the publisher to print them. This copy of Carlyle's work is inscribed by Emerson to Thoreau. The two would exchange numerous books in the years to come, though some were not inscribed, and at most three came from Emerson in the early years of their friendship (prior to 1840). Priced at £135,000 (British pounds, or approximately $203,882 in U.S. currency).

Item 121 offers a contemporary opinion about a specific event during the French Revolution, by a once ardent supporter who, like so many others, became its victim. Americans remember Thomas Paine for his fervent support of the American Revolution, but he was equally enthusiastic about the French one, at least for a time. His strong promotion of democratic institutions in France antagonized the British, but managed to get Paine elected to the French legislature, though he spoke little of the language. However, events quickly rushed past the radical Paine, turning him into a conservative by revolutionary standards. Offered is a copy of the Opinion de Thomas Payne [sic]...Concernant Le Jugement de Louis XVI... (bound together with two other works). Paine had favored the complete overthrow of the monarchy, rather than the constitutional monarchy of 1791. However, when that overthrow occurred in 1792, Paine did not agree with the assembly that King Louis XVI should be beheaded. This is Paine's speech calling for the King to be exiled to America instead, where he would have been welcomed as a supporter of the American Revolution. Instead of saving Louis, the plea almost got Paine beheaded too. There was no sentimentality in the French Revolution. He was imprisoned, and saved from execution only because he was accidentally overlooked when his time came, enabling him to survive long enough to escape the Reign of Terror. £3,000 (US $4,529).