New Acquisitions at the Arader Galleries 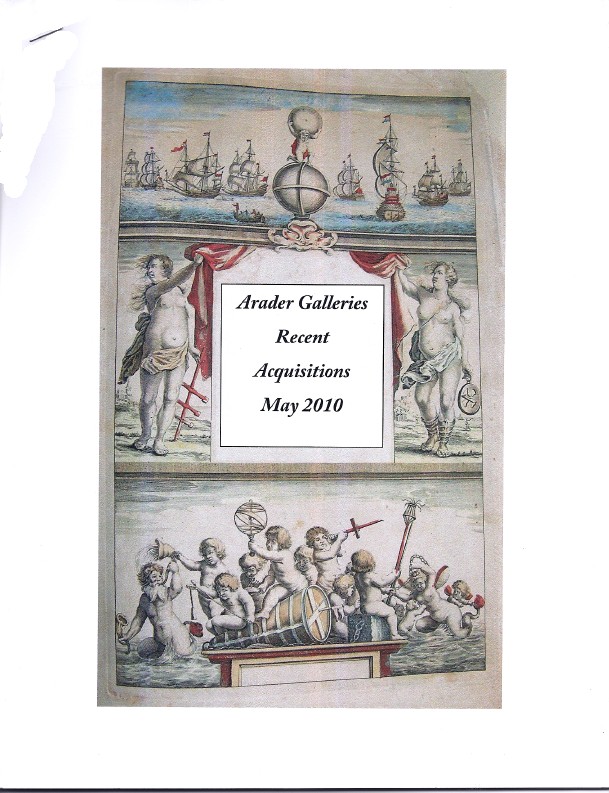 New Acquisitions at the Arader Galleries

The Arader Galleries has issued a catalogue of Recent Acquisitions May 2010. The Arader Galleries specializes in books, maps and art, with this catalogue being devoted to the first two of those categories. That is not to say that the maps, illustrations, and bindings are not works of art themselves, rather that they were originally created for more practical purposes. The reality is that these are classic examples of a marriage of form and function, beauty and practicality combined in one. Here are some of these remarkable new acquisitions.

The great mapmakers of the 16th and 17th centuries came from the Netherlands. They started with the maps and atlases of Gerard Mercator in the first half of the 16th century, and ran through the great 17th century atlases of the Blaeus. In between came what is frequently referred to as the first modern atlas, the magnificent Theatrum Orbis Terrarum of Abraham Ortelius. First published in 1570, it grew as more and more maps were added in later editions through the end of his lifetime (1598). Offered is a copy of the second Latin edition from 1584. It contains 112 double-page engravings of the latest maps of the world, all in contemporary hand coloring. This copy came from the library of Louis II, Duke of Bourbone-Vendome, who lived from 1612-1669. Louis was a grandson of French King Henry IV. After his wife's death, Louis became a Cardinal. Priced at $365,000.

Next we have a first Latin edition of the Speculum Nauticum, or what was known in Dutch as the Spieghel der Zeevaerdt (Mariner's mirror) when first published in 1584. The first Latin came two years later. It was produced by Lucas Waghenaer, a man who spent 30 years at sea before settling down to produce his atlas. In his years at sea, Waghenaer had gathered charts and other information from seafarers of various nations. His atlases provided charts and other directions and instructions necessary for safely navigating the waters off the European coast. It was immediately in great demand, leading to translations into several other languages as well. $185,000.

Other cartographers appeared in the years after the great Dutch mapmaking era, including the Frenchman Guillaume de L'Isle. Offered is a composite atlas of his and a few other maps which came from his widow circa 1731. Included is his famous Carte de la Louisiane et du Cours du Mississippi, one of the most important maps of the American West. At the time, France controlled Louisiana and the Mississippi, while other lands to the West belonged to Spain. De L'Isle combined maps from the French explorer La Salle with those of the Spanish expeditions to provide a look at this mostly unknown land. His accuracy and skill led to King Louis XIV creating the post of First Geographer to the French Monarchy specifically for him. $135,000.

Horace Walpole, 4th Earl of Orford, was the son of British Prime Minister Robert Walpole, a politician in his own right, writer, and perhaps most notably designer of Strawberry Hill, his neo-gothic home. Among his works is Fugitive Pieces in Verse and Prose, which he printed on his Strawberry Hill press in 1758. This copy was given to Mary Delaney, a close friend of Walpole for many years. Mary was an artist and widow at this time, though this was in no way a scandalous relationship. Just friends. She writes on the recto of the first blank leaf, "M Delaney 1763 given me by ye author." The two used the old form "ye" in their correspondence over the years, an indicia of their warm friendship. $8,000.