The Caribbean from the William Reese Company 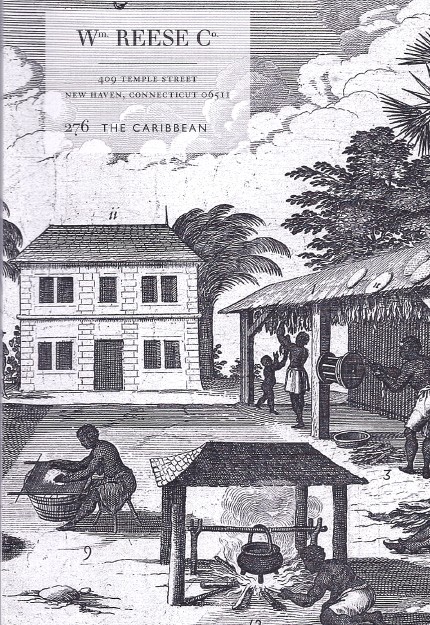 The Caribbean from the William Reese Company

The William Reese Company has issued a new catalogue, its 276th, entitled The Caribbean. It is filled with material from the 17th through the 19th century concerning those tropical islands noted mostly for tourism today, but at one time important centers of international trade. Their main crop was sugar, a product so desired in England and Europe to justify, in those nations' public minds, the imposition of slavery on thousands of far off Africans and their importation to the New World to work the fields. Additionally, the islands became pawns in the battles between the European powers, and a source for raids on Spanish shipping, bringing gold and other valuables plundered from the homeland of America's natives back to Spain. After the American Revolution, Europe's hold on this area began to fade, eventually giving way to independence for all but a few islands that wished to retain their colonial connections. Now, here are a few of the items pertaining to the Caribbean offered in the Reese catalogue.

The desire for sugar was so great in Britain that people looked past the enormous human sacrifices required to feed their sweet tooth (and love of rum). Well, not everyone did. Anthony Benezet was an Englishman living in the Pennsylvania colony, this being before the Revolution. He wrote a book titled A Caution to Great Britain and Her Colonies, in a Short Representation of the Calamitous State of Enslaved Negroes in the British Dominions. Benezet saw the horrors of slavery in the colonies, and tried to prick the consciences of his fellow countrymen. Writes Benezet, "How many of those who distinguish themselves as the Advocates of Liberty, remain insensible and inattentive to the treatment of thousands and tens of thousands of our fellow men, who...are at this very time kept in the most deplorable state of Slavery, in many parts of the British Dominions?" This is a 1767 London edition (the first was published in Philadelphia), and unfortunately, the British didn't pay much attention to his message. One can only imagine how different, and better, American history would have been if the British had taken Benezet's words to heart and outlawed slavery before the Revolution. Item 18. $750.

Slaves were never more important to a British colony than they were to Jamaica. Vast numbers were brought to the island to work the sugar fields for generations. However, Jamaica did not start out as a British colony. It was claimed for Spain in 1494 by its European discoverer, Christopher Columbus. In the mid-17th century, the British decided they would like a large Caribbean island, something that only Spain possessed, and set their eyes on Hispaniola. They attacked in 1655, only to suffer a miserable defeat at the hands of the Spanish. They then searched for a consolation prize and found one in Jamaica, which was lightly defended by Spain. They overwhelmed the few defenders and seized control of the island, which they held until independence. Item 89 is A Brief and Perfect Journal of the Late Proceedings and Success of the English Army in the West Indies... published in 1655. It describes the British failure at Hispaniola along with the successful seizure of Jamaica by forces led by Admiral Penn (William Penn's father) and General Venables. Penn's success and the status he received would help his errant son obtain the colony to become known as Pennsylvania when his contrary religious views might well have earned another person punishment. Item 89 a sammelband containing this work and four others. $9,000.