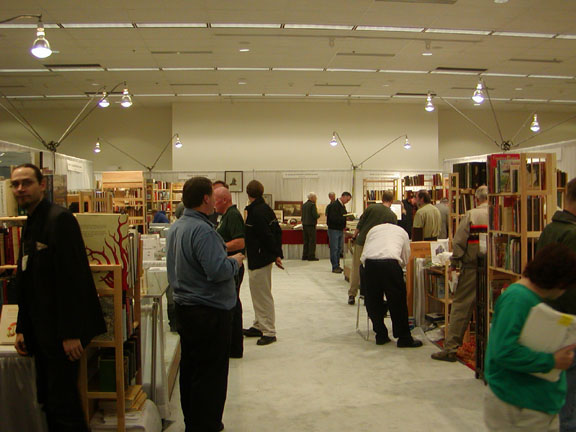 There is life in the book trade after all and it was in evidence over the weekend of October 10 and 11 in a beautifully staged show in Seattle on the grounds of the 1962 World’s Fair. The show was organized by Lewis Collins and David Gregor. One hundred and seven exhibitors brought material from as far away as London (U.K., not Canada) although the preponderance of the exhibitors were from the northwest.

The announced, if unofficial, attendance on Saturday was one thousand and the two day total estimated at more than 1,500. These estimates are unconfirmed but the reality was the aisles were consistently filled, the browsers motivated and exhibitors happy. The weather was strictly Seattle with intermittent showers and sun.

Book collectors who made the trip should have been pleased.

On Friday night exhibitors were invited to attend a dinner sponsored by the Book Club of Washington that featured Rodger Wendlick, an interesting and effective speaker, who spoke of his book collecting career in amusing terms. He was, in his time, an obsessed collector of all things Lewis and Clark. His story had a happy ending as he sold his collection to Lewis and Clark University for enough money to repay his various mortgages, credit cards and loan sharks. His presentation may have been heightened for effect but the basic outlines rang true for every person who has ever bought books that strained their financial limits. Such is the wonder of book collecting, a passion for the lucky few.

Visitors stopping by the Americana Exchange booth asked about titles they were unable to locate at the show. In casual discussions it became apparent they knew well ahead what they would be looking for but did not generally think about visiting the book show’s website to preview its exhibitors and their inventories via the internet. Future integration of collector interests and dealer decisions about what to bring may make book shows even more effective. As it was, it was very worthwhile.

Links: www.seattlebookfair.com for the book fair
www.thejourneycontinues.org for the Lewis and Clark collection at Lewis & Clark College