Nine is the Charm 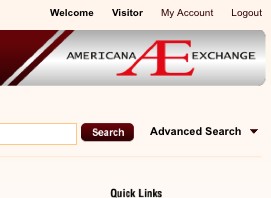 A new look, a new logo

Nine is the Charm

The Americana Exchange begins its ninth year with the release of AE Monthly today. I never thought achieving success for this project would be easy, in part because we joined the flow of goods and services migrating to the internet well before the rare books, manuscripts and ephemera audience was prepared to prefer it over traditional venues and alternatives. In 2002 the trade, such as the aggregation of dealers, collectors and institutions together were loosely understood, much preferred their then current models and mechanisms to the uncertain evolving methodology the net suggested. I do not blame them. They, better than I, sensed the risk to their traditional markets that accelerating unpredictable change online would increasingly pose. Whether, at the outset, it was wishful thinking or carefully considered perspective the broad consensus of the field at the time was that AE wouldn't last. Two thousand nine hundred and twenty-one days later its apparent that reports of our death were greatly exaggerated. The site continues to gain strength, benefiting from the now widely held perception that the future of virtually every form of information is online. Not that it has been easy or anything like I expected.

From the get-go there were those who saw in the Americana Exchange value or potential, signed-up and have been members all the way along. Others accepted early free trials, found the site insufficiently rewarding, slipped away for a year or three but developed the habit of returning periodically to evaluate the site as it evolved into a test of new possibilities. Year by year we broadened coverage, added upcoming auctions, older records and new features. Those coming back, as a consequence, increasingly signed up. This year we expect more will join as we continue to offer fresh thinking about a field as old as Gutenberg that is part of many other focuses but hardly anyone's principal focus as it is here.

As we head into year nine on AE change continues - driven by technological transformation, changing demographics, shifting preferences, and an uncertain economy. At a moment when fresh thinking is required we're bringing our A game.

By mid-September we will re-introduce the site, by mid-October add options intended to bring buyers and sellers into a continuing common space. In the first release we're focusing on strengthening the AED and improving navigation. We are speeding the searches, searching all databases together, listing the outcome of whichever database is chosen while providing the number of co-results in each database. Scale is important. A search in upcoming auctions for Albany will yield a few new matches every day, a larger number of results in Books for Sale, and a very large number in the AED. Narrowing the search will instantly bring the number of related records in each database into focus. Specific results can then be instantly cross-indexed. Of particular interest will be the total numbers of matching records. For the first time large searches like New York are going to bring up close to a quarter million results in a few seconds.

Beyond changes within 'search' we have focused on appearance, simplicity and navigation. The emphasis is on intuition. If we have to provide elaborate explanations we aren't doing our job. From experience we know that extra steps reduce usage. A year ago we provided 2,150,000 records, as we begin year nine 2,700,000. Our plan for 2011 is 4,000,000 and the goal 5,000,000.