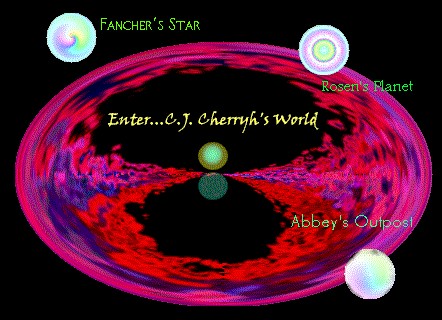 C.J. Cherryh's older works may be found in Cherryh's world.

Technology and Science Fiction have always shared a symbiotic relationship - where there is one, the other will follow; so it should not be a surprise that Science Fiction authors in the internet age have embraced technology in all its dazzling new formats. From the Kindle to the blogosphere, from the podcast to the print-on-demand market, authors are using alternatives and additions to the printed page with zeal. This outreach to new technological innovation is great for the author and for the general reader who follows that author - but what does it mean for the reader who collects an author's work? Will collecting keep up with the changes in technology? Should it?

While all authors in all subject matters are dealing with the changes, the Science Fiction community has welcomed them with enthusiasm. These authors keep current on the instantaneous (and sometimes spontaneous) adaptations of technology that appear as if by magic, and then presto-chango, they finagle even more ways of utilizing the medium.

Free-on-line first printing
SF author Cory Doctorow took a huge gamble for himself and his publisher and convinced his publisher to offer the entire contents of his first published novel (he had been publishing well received short stories and non-fiction pieces for a few years prior) - free of charge - online as a downloadable file - before the print version of the novel was available to the public. Why would Doctorow do such a thing? How could he ever make any money on the print version if his readers had already read the book for free? And where does the internet version fall in the area of collecting? As it turns out, Doctorow's calculations paid off and the print edition sold well and continues to sell. This is great news for Doctorow, and for his fans - but for those of us who collect SF (which, I should mention is my catch-all synonym for SF / Fantasy / Horror and its peripherals), we want the FIRST version of a work... the closest available format to the writer's thought process (depending on how rabid a collector one is) and that version is, be definition, the downloadable format from the internet.

Other experimental formats
And if a downloadable book (I should mention that Doctorow's book - Down and Out In The Magic Kingdom {Tor Books, 2003} - did not have textual changes made between the online version and the printed version) is an odd duck to collect, there are even newer formats, newer twists to the idea of what is a book / writing that collectors will have to deal with as far as collecting is concerned. For example, Wil Wheaton (best known for his stint on TV as Wesley Crusher in the series Star Trek: The Next Generation), wends his way through the geeky world of the internet as a blogger, sometime journalist and an author (along with continued work as an actor and voice actor).

This July he made available a group of short stories he had written - the catch was, instead of going through an established publisher, he decided to offer the short story compilation (offered either as a downloadable file or as a print-on-demand physical book to be mailed out) via an online self-publishing site called Lulu. Now this compilation barely squeaks by for the purposes of this article because there was a limited edition chapbook printed in 2009 for a convention, but the thought counts - and is in the process of rearranging SF collectors views of what exactly is there to collect.