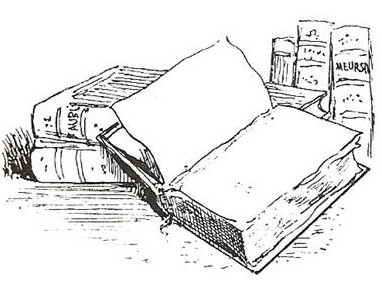 By Lee Kirk, The Prints & The Paper - www.kirksbooks.com

This was the first show I have done in 7 years due to family and personal health issues, eldercare, etc. Since it was the 5th year for the show, I hadn't even had a chance to attend and see what it was like. It bills itself as "an unpretentious book fair" which I think is very smart, for reasons I'll get to later.

One quick note - I was set up on the stage, which I shared with a vendor couple, Truman and Suzanne Price, with whom I had corresponded by email but not met before. They brought a great collection of children's books and set up with a little "tea party" vignette - children's table, chairs, etc. and "guests" were stuffed versions of Babar, Little Bear, Jeremiah, and Paddington (the revelers even had a vase of fresh flowers on their table). Plus Truman plays a mean fiddle. I wish we could have stayed to hear more but since he started fiddlin' after the show hours Friday and we had a long drive over to Beaverton and supper, we had to leave. Truman's band information is at www.trumanprice.com. Booksellers are certainly an interesting lot!

The venue is a Masonic Lodge building, hence the stage. The sales floor is on two levels (a shallow ramp going downstairs, where I was located.) It's a "shoestring" show - dealers brought their own tables (one was provided), table covers, and other display items. Cost was $135 for one space. There were 24 vendors, 33 spaces - some took two spaces so every space was full, and I understand that there was a waiting list.

There was a decent setup period on Thursday (1-6 pm) and we drove to Portland (from Eugene) without stress and got set up handily. There was another set-up time Friday morning, and the doors opened at 2 pm; the show ran until 8 pm. I was dubious about attendance on a Friday afternoon, but when I "checked the house" before the doors opened there were at least 35 people in line and more coming. Trade was steady until around 5:00 - we expected another little "after work" rush but it didn't really happen. We all knew that Saturday would be slow - Friday was typical of the last 6 weeks - 64 degrees and rainy. Saturday was forecast for 81 and sunny and, after listening to Portlanders grumbling about flooded and washed-out gardens and considering that it was the last day of the Rose Festival (parade day? Not sure) we figured the door would be down. It was - apparently they had about half the usual number of attendees. Still, those who came were buying.

This was one of the best-run and most accommodating shows I have seen. Advertising was good and there was signage everywhere. There were refreshments for dealers all day every day (bagels and spreads, pastries, gallons of hot coffee, etc.) and lunch fixings were provided on Saturday (quality cold cuts, cheeses, and other sandwich fixings, veggie snacks, chips, desserts.) Everything ran smoothly and there were volunteers to provide potty breaks and so forth when needed. Lovely!!! Thursday night there was also a get-together at a local pub, with the Association footing the bill for beer, sodas, and appetizers (and kept them coming) and individual dealers had the opportunity to order meals on a no-host basis. It was a nice opportunity to exchange news with old friends and get better acquainted with new ones.

It was lively during setup times. Since many of my old dealer friends knew that I hadn't been "out" for so long they knew that a lot of my stuff would be out for the first time and they came a-running (They also know that my prices are always reasonable, and that I offer 20 percent - which, I'm happy to say, everyone I dealt with did also).

I had few expenses aside from gas, etc. since we stayed at our daughter's in Beaverton - bed and board although we bought a couple of meals "out" for convenience sake. With $135 invested in the space (plus the cost of a couple of sturdy folding tables to replace my shaky ones, but they will pay forward) I brought home close to $1000 in cash and did about $1500 in trade (Dealers had stuff I needed; I had stuff they wanted - works for me). Gary (my helpful spouse and "gofer") negotiated two wonderful archaic skills books in my trade deals - his "payment" for working so hard (We consider his collections to be one of our best investments...at least better than our IRA, which has lost almost 50% during this recession). The after-the-show sales generated from contacts there will add to the income. Already by Wednesday after the show, I had a firm $700 additional in hand with lots more follow-ups in process.