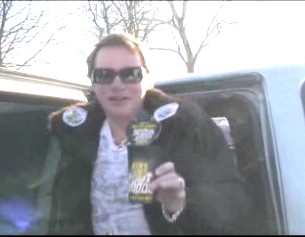 The flamboyant Raymond Scott at an earlier hearing.

Maybe there's something in the water. England has become the site of two dramatic and unusual book theft cases. One involves the legendary "Tome Raider," who officially became a two-time loser a few days back. The other implicates one of the more colorful characters ever accused of stealing a Shakespeare First Folio, a trial currently underway.

William Jacques, better known as the "Tome Raider" earlier this decade, proved the old adage that insanity is doing the same thing over and hoping for a different outcome. In the 1990s, Jacques was one of the more successful of book thieves. He would steal books from major English libraries and take them to auction houses. In his time, he probably stole a couple of million dollars worth of books. Jacques is a learned and said to be very intelligent man, and like most smart thieves, he was very good at it until he got caught. Thefts are like driving a car. You can do it right a hundred times, but make one mistake and all the successes are erased. Jacques was brought down by one £120 book, that the bookseller/purchaser noticed had identifying markings removed. The book was traced to Jacques, and then everything else Jacques had sold at auction was traced, and soon enough his whole house of cards came tumbling down. In 2002, Jacques was convicted and sentenced to four years in prison.

According to police, Jacques was not out of prison too long when he returned to his old ways. This time he stole a 13-volume set from the Royal Horticultural Society's library valued at £40,000. He was arrested Christmas Day last and the trial took place in June. The outcome was the same as years earlier. On June 22, he was convicted. Reportedly, he signed in to the Horticultural Society library using a false name, and exited walking stiffly, books hidden beneath a tweed coat. He did this too many times, thereby raising suspicion. Eventually, he was stopped, and found to be holding "a thief's shopping list," a list of books and their locations he wished to take, as well as of those books with maps and plates which could readily be removed and sold.

Sentencing is scheduled for July 20. Jacques has reportedly been told that the term will be measured in years, not months. However, the judge is giving him time to decide whether he wishes to reveal the location of the missing books, as this could be a mitigating factor at the time of sentencing.

Meanwhile the trial continues in the case of Raymond Scott, who may not have a colorful nickname, but does not lack for a colorful personality. Scott has made a number of dramatic appearances in court, but the publicity-conscious pensioner with extravagant tastes will need to be at his best now as the case against him is quite serious. He is accused of stealing a Shakespeare First Folio from the library of Durham University.

The Durham First Folio had been missing for 10 years when Scott walked into the Folger Library in Washington, D.C., asking to have his book's authenticity determined. The experts brought in by the Folger agreed it was authentic, but they determined it was something else too - the missing Durham copy. Scott said no, it came from the family of a lady friend he had met in Cuba. He questioned the identifying points listed by the Folger's experts. Meanwhile the police questioned his story. How a First Folio would have ended up in Cuba was a bit of a mystery, particularly one similar to the missing Durham copy, and how Scott was able to make such trips and live so well on a meager salary also was confusing (he said his mother helped him out). Undoubtedly, suspicions were not eased by the fact that Scott lived only 10 miles from Durham University.

Prosecution experts claim to have identified the copy through a manuscript note written inside. They say that Scott mutilated the book in an attempt to disguise its origin, but that even in its diminished state it is still worth £1 million. Supposedly, Scott had become infatuated with a Cuban waitress, which led him to try to sell the book so as to be able to carry on his romance. However, not even this relationship is certain. Scott, who has made multiple flamboyant court appearances over the past two years, such as arriving in a horse drawn carriage or well-stocked limousine, has not let his followers down. He came dressed in expensive clothes, the prosecution claims a ruse to convince others he is a wealthy playboy and not a poor thief, and flashed a "V" sign to onlookers.

Raymond Scott has provided the public with much humor over the past two years, but right now he is in the fight of his life. That life will become a lot less funny if he loses his case in court. A decision is expected soon.