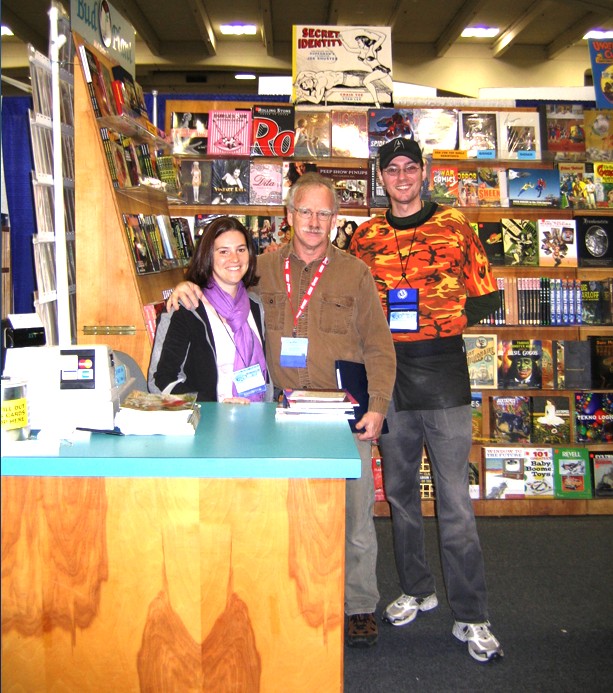 Bud Plant, his daughter Alison, and Joe Douville from his staff.

"What a long strange trip it’s been...." This year Bud Plant celebrates the 40th year of Bud's Art Books. That's forty years since 1970, when he started in the mail order book business with a specialty in comic arts and illustration. That's forty years that's seen "pop culture" go from an obscure cult to one of the heavy hitters in the collectible world.

It's the same forty years that catapulted old favorites like Superman, Batman and Spiderman, their underground cousins like Zap and Mr. Natural from a stash under your brother's bed (described by your mother as "junk") to some of highest value contemporary printed materials extant. This year for the first time two individual issues of vintage comic books topped the $1,000,000 mark. These eye-popping results were achieved at recent auctions for first appearances of Superman (Action #1) and Batman (Detective 27).

There are some people, this writer included, who thought Bud Plant had to be a pseudonym. But no, Bud Plant is his real name, and at 58 he and his business are still going strong. It's hard to find a segment of the pop world where he hasn't left his mark. Over the years he's been a retailer, wholesaler, distributor, publisher, exhibitor, antiquarian specialist, dealer in original comic art, collector and fan.

Today Plant is best known for new books and comics. His typical customer is older, not an avid internet user and likes to order by phone using a credit card. At any given time Bud's Art Books stocks about 1,600 in-print titles including fantasy art, illustration, nostalgia, pin-up cuties and adult material. His headquarters is a 10,000 square foot warehouse in Grass Valley, CA not far from Sacramento. The firm employs ten workers (down from a high of eighty during his heyday as a leading comic distributor).

Bud's Art Books publishes twelve high circulation catalogs a year. In 2007 they mailed a million pieces. "This year the numbers are smaller," but they are all meticulously photographed and vividly described. The 40th anniversary issue runs 122 pages in full color on slick paper and it's free on request. There is also a high traffic website and an interesting blog by the man himself. (www.budsartbooks.com).

But even scaled back, "It's still a pretty big business," says Plant. He estimates gross revenues at about $2.8 million annually. New books account for 90 percent of sales. The other 10 percent comes from his less well known antiquarian side: He is a partner in Plant & Hutchison Books ABAA, which specializes in vintage art and illustrated books, also children's illustrated books listed on line with his partner Anne Hutchison (www.abebooks.com/bookseller/hutchison, bpandhbooks@mac.com). He is also a member of Booktown Books, an old and rare book store Grass Valley with 12 cooperative members. (http://booktownbooks.com)

Roots back to the 1960s
To be totally accurate Plant's roots reach back even farther than 1970. They go into the 1960s in San Jose where he was as a teenage comic fan and collector. He went on to start a comic book shop there in 1968 which grew to be a seven store chain called Comics & Comix featuring both above and underground stock.

About 1972 he crossed over to books because "comics became too expensive and I found a better value in books." During this period with the help of fellow enthusiast Ken Sanders of Salt Lake City and Oscar Graham of Graham Book Gallery ABAA in Houston he was introduced to the antiquarian trade and discovered classic illustrators like Maxfield Parrish, NC Wyeth and Arthur Rackham. Another influence on the antiquarian side was Jim Lorson of Lorson Books and Prints who died in 2008. "He was one of the greats,” says Plant.

Plant credits his friendship with Phil Seuling, the man responsible for popularizing the NYC Comic Art Con, as a big influence in his early years. "I knew him well in my late teens. I'd load my van with books, go to his show, stay at his house. I learned a lot from Phil." (http://en.wikipedia.org/wiki/Comic_Art_Convention)

Plant describes 1972-1988 as "a period of tremendous growth" for his industry. "Interest in the shows grew and distribution was concurrent." In 1982 he started to distribute new comics and eventually became the nation's 3rd largest distributor. This lasted until 1988 when he left the retail trade and sold the distribution business to Diamond Comics. "I guess you can say we burned out," Plant says of the downsizing.