Amazon's Demand for "Price Parity" Has Dealers in an Uproar 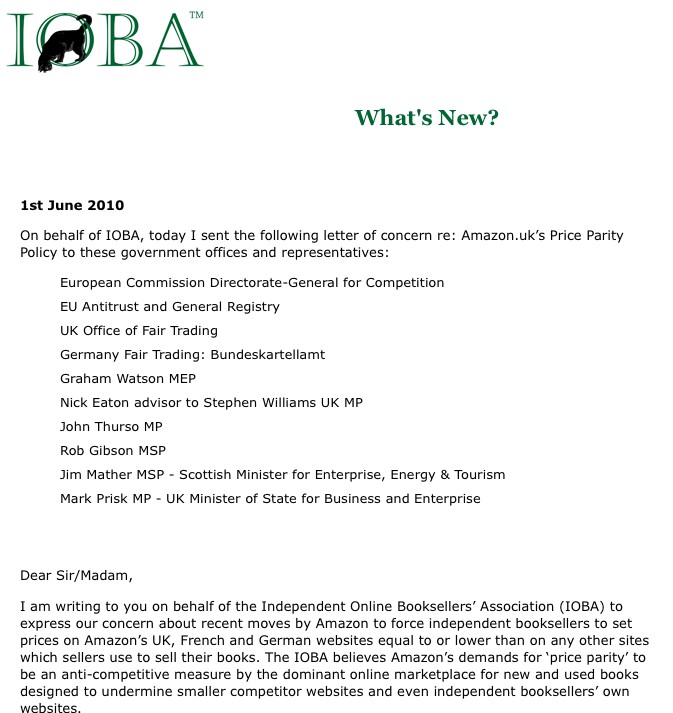 The recent application of Amazon.com's "price parity" policy to European booksellers has resulted in a great outcry from those countries' dealers. The policy has been in effect in the U.S. for several years as part of their seller's agreement, though how widely this is understood, or how carefully obeyed and enforced, is uncertain.

"Price parity," which was recently extended to the U.K., France, and Germany, requires that sellers charge no more for their books on Amazon than they do on any other site, including their own. They can charge less on Amazon, just not more. Price parity applies to both the cost of the item, and to the total cost of the order, including shipping, rebates, and other discounts.

In explaining the reason for this requirement on their U.K. website, Amazon wrote, "Customers trust that they'll find consistently low prices and other favourable terms on Amazon.co.uk and we think this is an important step to preserve that trust." On its face, the justification is not unreasonable. Amazon wants to be known as a low-price vendor. If its listing merchants offer the same books for less elsewhere, their reputation as a low-price seller could be damaged. Customers might not be confident that they were getting a good price.

Of course, it's never quite as easy as this, and as a result many booksellers are quite unhappy. A group of English booksellers earlier petitioned that country's Office of Fair Trading contending this was harming their business. Then last month, IOBA (International Online Booksellers Association) jumped into the fray, sending letters to numerous government watchdog agencies in England and the European Union claiming Amazon's move to be "anti-competitive." Just as there is a reasonable argument to be made for Amazon's position, there is a good argument to the IOBA position as well.

IOBA argues in its letter that Amazon's charges for listing on their site "are often higher than on many other websites and often substantially higher than selling books through their own independent websites." Booksellers will have no choice but to list at prices high enough to cover Amazon's charges (15% commission plus listing fees) on less expensive sites. Says IOBA, "Amazon’s policy of forcing sellers to reflect the higher costs involved in listing items for sale on Amazon across all websites is likely to be bad for book-buyers by generally increasing the cost of books, and is likely to be particularly damaging to smaller, cheaper aggregator site competitors to Amazon’s market dominance." They go on to note, "This policy also removes the freedom from independent booksellers to set the prices that they want for books on their own independent websites and...to offer sales and other special offers to their own customers on their own websites."

From Amazon's point of view, they are simply protecting themselves from booksellers making their site look bad by charging higher prices there than they do elsewhere. From the booksellers' point of view, Amazon is using its market power to not only demand high fees, but to prevent them from selling for less on the sites that do not demand so much. Amazon's attempt to lower prices on their site, combined with high fees, may actually result in higher prices for consumers, and prevent lower cost competitors from entering the market. If less well-known sites are not even allowed to compete against Amazon for customers on price, they may have no realistic chance of competing against Amazon at all.