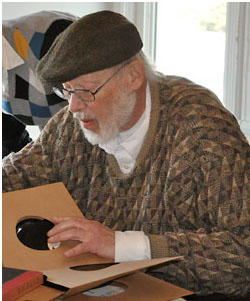 Twelve hundred and one University Avenue in Berkeley is both outpost and Mecca for those who love books. This is the store, shop and warehouse of Peter Howard who, after graduating from Haverford College in 1960, completed a masters and most of the requirements for a Ph.D. at U.C. Berkeley in 1962. In 1963 he launched Serendipity Books with high hopes, and a balance sheet filled with ambition.

In 1967 he opened a store on Shattuck at No. 1790 and in time broke through walls and leased five locations nearby before buying his present 5,500 sq. ft. site on University Avenue in 1986. For the past 25 years he has immersed himself in an ever deeper and more complex inventory of what is thought to be something like a million items divided 60/40 between shop and a warehouse long ago made necessary by Peter's continuing purchases. Beyond all this, he carries a steady flow of de-accessioned material from his alma mater. The card catalogue of this inventory sits neatly between his ears, his intelligence and memory the glue that hold this complex enterprise together.

He has for some time though, been seriously unwell; the news doubly difficult because his wife Alison is also fighting cancer. The shop is up for sale, the sure sign a generational shift is underway. Mr. Howard would not relinquish control unless required.

For the past two months two firms specializing in the purchase of large inventories, Powell's and All About Books, have considered purchasing the complete stock but nothing has so far materialized. In either case, the shop would close and the inventory be shipped to Washington or New Jersey. What will not fit into the crates and boxes, nor otherwise be transported, is the spirit of the place; the karma, zip and pizzazz that have made Serendipity an institution of the first order for those who love books and have learned to tolerate the sometimes caustic byplay of a sparring owner whose temperament could range from morning glow to afternoon showers all within the time it takes to eat a ham sandwich.

In this respect, Mr. Howard is in spirit, if not by DNA, the linear descendant of Charles Goodspeed, the Boston book selling codger of the first rank who suffered mortals, if anything, less willingly. They both presided over important cultural way stations. As rare as the rarest books, such places resonated a deeply felt appreciation for the printed word that is ever more out-of-step with iBooks, eBooks and the Google searches that serve peanut butter to people who have never tasted fillet mignon. Some few shops become institutions, a title rarely bestowed and less often earned. On Mr. Howard's head the crown sits lightly.

The open question now becomes what is next. The inventory, whether it is 600,000 or one million books of which 20,996 were recently available online, is offered for $2,250,000, the 5,500 sq. ft. ivy clad building for $1,250,000. One dealer, John Durham of Bolerium Books of San Francisco, is interested to rent the shop, but not to purchase the entire stock and much prefers that Peter repent his exit and live on to squire another generation. He explained, "I like the space, I love the guy." Just this past week Peter made an increasingly infrequent trip to the shop and announced, "no more deathbed discounts." He had a week off from chemo, was feeling revived and encouraged by his doctor.