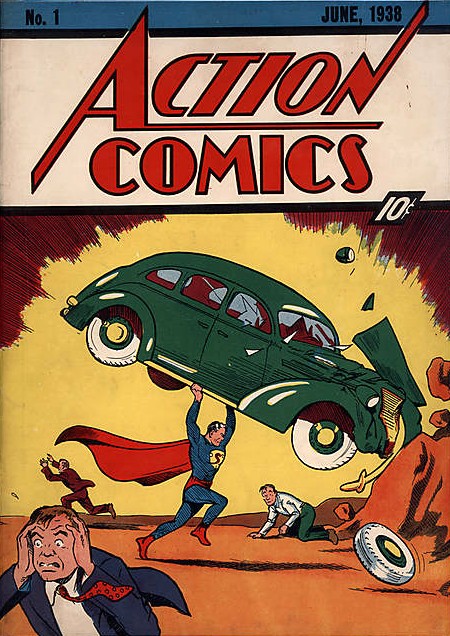 It may be a comic, but this story is no joke. If you weren't mad at your mother for throwing out your old comic books before, you may be now. A copy of an old comic sold on the online auction site Comic Connect a few weeks ago for $1.5 million.

Of course, this was no L'il Lulu, no Nancy and Sluggo. This was Superman, Man of Steel (though this comic book was no steal). It was the first appearance of America's first superhero, Action Comics #1, published in June 1938. Just a year ago, a copy of this comic book sold to the drummer from the rock band System of a Down for the astronomical price of $317,000. Who would have thought at the time it was a bargain? In March, the $1 million mark for a comic book was pierced for the first time when another copy of this first edition sold for a cool mil. (this comic may be desirable, but it doesn't appear all that rare). Superman was outpaced a few days later by Batman, whose first comic sold for $1,075,000. Superman was not about to be outdone by his rival, hitting the $1,500,000 mark a short time later.

Can Bruce Wayne top that? Not any time soon, according to Comic Connect co-owner Vincent Zurzolo. "This new record will be hard to break," he explains, "because this particular Action Comics #1 is literally the single most valuable comic book on the planet." Certainly as of today it is the most valuable. Additionally, this copy grades a bit higher than the copy sold for just $1 million. It spent 50 years hidden inside a pile of other 1930s magazines, protected from air and light, before being discovered. It was then purchased by the previous owner, who held it for 17 years before selling it to the auctioneers. Who knows what it will be worth when the latest owner decides to sell.

Explaining the amazing price, Zurzolo said, "Some of today's most successful entrepreneurs were yesterday's comic geeks. They don't want a Van Gogh or Picasso. They want collectibles that mean something to them. Our society is built on pop culture. Superman, Spider-Man, Batman...they're the icons now."

When first issued, this comic sold for 10 cents. For those keeping track, that's a 1,500,000,000 (1.5 billion) percent return on investment. Annualized, that comes out to something in excess of 20 million percent per year. I doubt even a Gutenberg can match that.