Important Maps at an Important Time 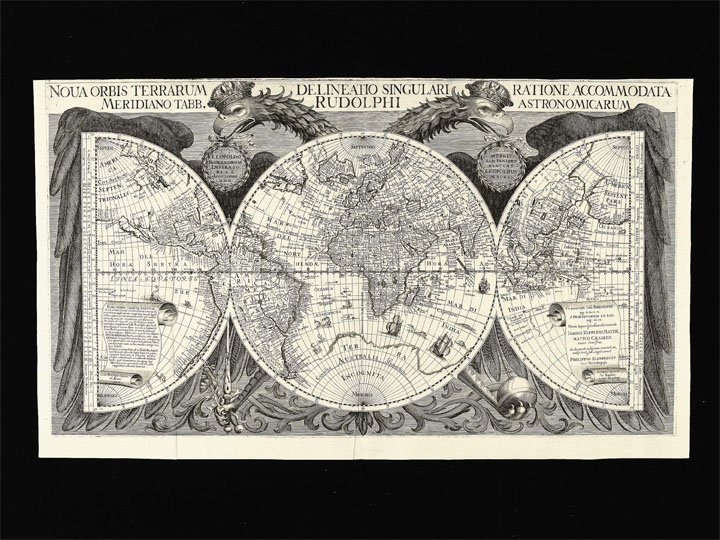 
Lot 7 is another important Forlani map. It is "the extremely rare first state of the first separately printed map of North America, and the only map of North America published by the Lafreri school." It is dated 1565. The new world comes into view. French, Spanish and English claims are pressed by explorers representing monarchs and monarchies straining to understand the vast wilderness that, report by report, emerges as larger than the countries and kingdoms making the claims.

The British and Italians sail down the coast, the Spanish concentrate on Florida, the Caribbean and South America, the Portuguese on lands west of the Cape Verde Islands. The audacity of tiny countries claiming territories that grow larger with each exploration, as the search for the passage to Asia turns to recognition that these islands are continents, is the story and hubris expressed in this map. It is an exceptional moment, the map an important survival, the imagination of man dwarfed by reality.

Lot 18 is Vincenzo Maria Coronelli's Navi, o vascelli, galee, galeazze, galeoni, e galeotte, bucintoro..., "one of the great volumes of ship portraiture and design, celebrating the long-standing naval heritage of the Venetian Republic by one of its great cartographers." This volume was printed in Venice in 1697 toward the end of the great Venetian era. Control of the passage between Europe and Asia once made Venice arguably the most important city-state in the world. This book captures the feeling with stunning images. Some books go on to shelves and are thereafter rarely opened. This book invites continuing interest. The estimate is BP 25,000 to 30,000. Mr. Benevento acquired it in Paris at the Auction Rinaud-Giquello for $85,800.

Lot 66 seems destined to find a new home. It is Philip Eckebrecht's world map that was created in the 17th century. Titled Nova totius Terrarum, it is an exceptional example of the hemispheres drawn in bifurcated form, a strong impression of a dramatic map. Mr. Beneveto paid $63,000 for it.

In selecting these examples to highlight it suggests that some maps and books are more favored than others. It is true that the estimates vary from a few thousand pounds to a third of a million dollars and that for a variety of reasons some examples have become both exceedingly rare and coveted. In between the natural variation of age, size, color and importance is reflected. The fact is the collection is deep in important maps and exceptional examples.

This sale that will, in less than one and half hours, dispose of a collection that has given Mr. Benevento for seven years excuses to travel, reasons to read, catalogues to dissect, calls to make, negotiations to initiate, and packages to tear open. It is the premature conclusion to a collection that only two years ago looked like it would be his faithful intellectual companion for a decade more.