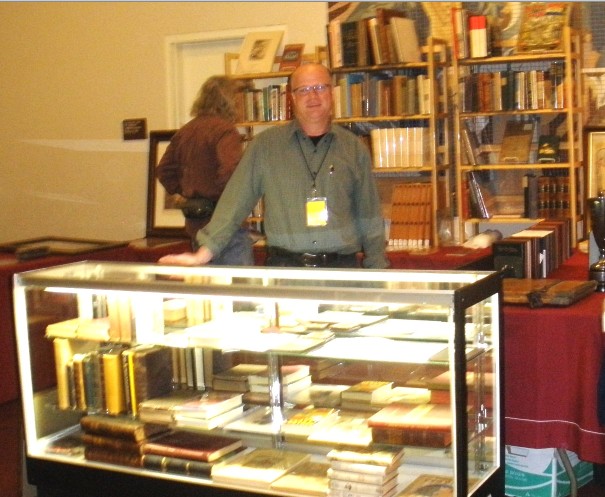 This year's first annual Sacramento Spring Book Fair was quite a success, according to Jim Kay, the show's promoter.

I asked Jim how the show went. "Pretty well, we actually had more people than we did at the September Fair. It was sort of a surprise since this was the first time that we've done the spring show and it was in a month that people were not used to coming to it. I did give out thousands of free passes to get customers in."

I asked him if he planned to continue doing the show twice a year and he said that he will and encouraged all booksellers to participate as it is less expensive than many, has a great venue, and is very friendly.

We arrived early Friday afternoon and set up. One of the hardest things about fairs is to know what to bring. If I bring lots of Western Americana -- my specialty -- then that's what everyone else brings and there's a glut of it. If I bring cookbooks and garden books, there will be a wealth of them about. Last fall, I didn't bring any orchid books, and, of course, several people asked for them, so, this time I brought lots of orchid books because the Sacramento Orchid Society is very active, and I emailed them twice to notify them that I had more than 20 excellent orchid books that they could see at the book fair. I got one orchid book collector and he's not even in the society. I think it has something to do with Murphy's Law. My new rule of thumb is to bring the nicest, most eclectic books I have and hope for the best.

There were not quite as many sellers as the Fall Fair brings in, so we had a bit more space to move around and do some displays, which was nice. I think the more books that are face-front tend to sell. Once we were set up, we walked the grid to see what everyone else had brought. There was lots of great stuff. In particular I found a whole lot of Mark Twain in several different booths. Discovery Bay Books in Walnut Creek had some very fine looking British firsts of some of Twain's work. We live in Mark Twain country, so I'm always interested in what is out there. I only bought a couple though because they were priced too high, even with a dealer discount, to make any profit on resale. More about that later.

There was a new gal, Liz Pollock, from Santa Cruz this year. She's been in business since 2007 and this was her first show. Her store is called The Cook's Bookcase. She has unique and out-of-print books on cooking and wine, with a large section on French cooking. She also has books on food technology, agriculture and crops, letterheads and bills of ladings, and the like. She had a nice collection of reasonably priced cookbooks and she told me that she did pretty well. We discussed the "condition" of books and she told me that as long as the books were in moderately good condition, she would buy and sell them as she really enjoyed "putting the cookbooks in the hands of people who would use them." She has a webpage, www.cooksbookcase.com, but it isn't in working order as yet.