A Letter from New York 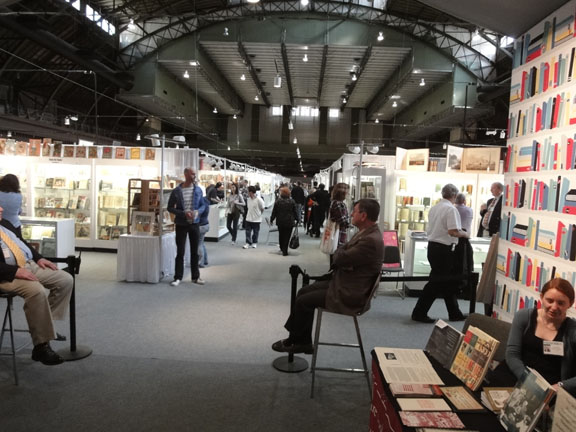 Book fairs serve many purposes. They are site, catalyst and barometer, a place for booksellers and book buyers to cross paths, find material, exchange ideas, and access the changing playing field. The recent ABAA book fair in New York was all of this and more, many of the leading dealers and collectors meeting at the storied 7th Regiment Armory at 643 Park to see old friends and old books and explore new possibilities. The world of printed material is rapidly changing but for a few days it felt like life as it has been even as it becomes life as it will be.

Two hundred and three members of the ABAA, the American Antiquarian Bookseller's Association, and ILAB, the umbrella organization that encompasses the ABAA and various international bookseller groups, spent four days in April exhibiting their best and most interesting material to their best and most interesting clients and would-be clients. The well-lit space, built in 1861 in response to President Lincoln's call for troops to suppress rebellion, provided an appropriate setting for antiquarians to contemplate the bloodless revolution now over-taking the field. For these few days the dogs of war were at bay even if the sounds of gun-fire are everywhere about. This show is not only America's finest book fair, it is also catalyst for many other events; this year nine book, manuscript, ephemera and photography auctions as well as another fair, the New York City Shadow Show. In the week leading up to, and for a few days after, New York City became world capital of the antiquarian book field. For those in love with collectible works on paper it's an extraordinary opportunity. For those who feel isolated with their passion fair week is the chance to feel included, so many odd ducks all flying in the same direction, reconfirmed in their passion.

Outside the world has been changing. New York, once home to hundreds of great old and rare bookstores now counts down toward the single digits, the Google search for rare book dealers in New York City, open shops by one count, now fifteen. Many more dealers remain and others regularly enter the field but today they sell on line. Few open stores, instead they open emails.

What once most separated dealers from collectors was information and that too has been changing. Twenty years ago, herculean memory, connections and extensive records gave dealers an unbridgeable advantage over collectors and institutions. Today databases amass information into searches and sorts that instantly calibrate rarity, relevance and price. Dealers who were once the gatekeepers of antiquarian knowledge now find themselves less aware of specifics than many collectors. It turns out that collecting subjects have always been deeper and more complex than bibliographies suggested. Today this complexity is accessible to those who understand that breathtakingly focused collections are the potential sum of what emerges day by day, not just what's available at shows, in catalogues and online. It is a world more different, exhilarating, exciting and frightening than anyone imagined: the man in a canoe confronting a title wave, a world in which the ability to collect efficiently soars while the men and women who sell books in traditional ways are forced to relentlessly adjust as old formulas fail and untested possibilities emerge, many of them mirages to the thirsty. The truth is that traditional book selling declines and the faceless, nameless reality that replaces it, although hardly visible, suggests acres of wild flowers as an alternative to the vase of prize tulips dealers now provide.