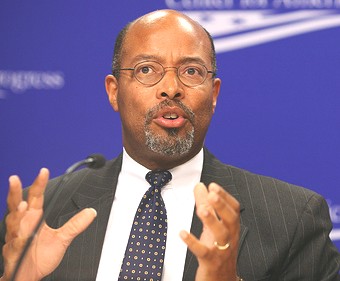 Police in Prince George's County Maryland have secured indictments in an alleged ring of book thieves operating at public and university libraries in the area. A dozen people, several related to each other, are said to have stolen 822 books valued at $87,000. Among the victims were several branches of the Prince George's public library system, the University of Maryland Baltimore County, and Harford Community College. The thefts have reportedly been going on for the past year.

These thieves did not target the rare book rooms or collectible works, but they did focus on an expensive category - college textbooks. As anyone who has had to purchase these lately can attest, textbooks these days are as crazily priced as a college education. Most of these books cost $100 and up. However, these thieves were hardly becoming rich on the process. Apparently, they weren't making much more than petty cash, some, evidently, using the money to feed drug habits. They would remove any identifying labels and sell the books to used book stores or online. As such, they were only making pennies on the dollar. These books tend to depreciate faster than an American car when driven out of the dealer's showroom. Unlike the more sophisticated thieves who operate in rare book rooms, this group made their money on volume, not margin.

Mary Eilerman, Chief of Harford Community College Security noted, "Ironically, there were books on ethics and philosophy." Unfortunately, it is unlikely any of the thieves stopped to read these books before they sold them. Glenn Ivey, local States Attorney, noted, "Pardon the pun, but they [the grand jury] really wanted to throw the book at this group." As of the time of the indictments, none of the stolen books had been recovered. The defendants are expected to go on trial sometime next year, though one would imagine in a case like this, if they are responsible, we will see some plea deals before that day arises. Technically, they could be sentenced for as long as 15 years in prison, though that seems way out of line with other book theft cases.