Affairs of the Heart 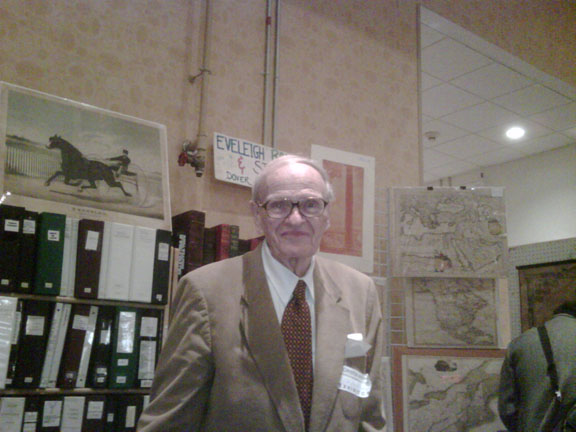 Comets will not be diverted from their paths. Neither will those in the embrace of books be turned back from their natural course. Recently economic uncertainty and bad weather paled to insignificance for the perhaps one thousand stalwart dealers, collectors and institutions who gathered in Boston for an antiquarian weekend of discussion, pursuit and purchase, just as they have each November for more than three decades. Here, over a fall weekend that can by turns be balmy or frigid, sunny or stormy, sometimes all in a single weekend as is the case for this the 32nd second running of the ABAA fair. Come early Friday morning the ponies are in the starting gate, completing their set-ups ahead of the 5:00 pm launch. In past years dealers have been avid buyers in the pre-opening hours. This year there is less interest because sales have been soft. The show, the first of two this weekend in Boston, will open on the wings of anxiety.

Down the street at the Radisson Boston, the shadow fair organized by Bornstein Shows, is being set up. It will open at 9:00 am Saturday and run to 5:00 pm, a one day high pressure event sandwiched into the ABAA's three day run: Friday 5:00 to 9:00 pm, Saturday noon to 7:00 pm, Sunday noon to 5:00 pm. The shadow fair, on Saturday, opens 3 hours before the ABAA fair and attracts both audiences for a red hot morning that goes flat in the afternoon.

Although these shows are staged near each other they are worlds apart. The ABAA fair is at the tony Hynes Auditorium, the Boston, Book, Print & Ephemera Show occupying a warren of congested rooms. The ABAA fair is floated in a large space it can not fill this year, the shadow fair sited in a giant sardine can, every crack and crevice of its barely sufficient space filled to overflowing. Between the two shows about 200 exhibitors are participating, a handful at both fairs. Both fairs, based on estimates provided by those who attended last year and this, suggest a somewhat smaller attendance but those attending seem committed. Both shows attract the true believers. In tough years that is the way it is.

The shadow fair, as it is called, costs exhibitors only a fifth for comparable space. Only ABAA members and associated organizations can exhibit at the Hynes. The shadow fair is open to all exhibitors with a convincing story and a checkbook.

At both fairs, as the hours and days progress there will be many reports of sales, some substantial, and by many accounts, better than last year. Such fairs, while portrayed as retail events, also play a critical role in providing a window for regional dealers to offer material to visiting national dealers. These shows are all about critical mass.

I have come to Boston to see two exhibiting dealers: The Hanrahans of Wells, Maine who occupy booth 219 at the Hynes and Leigh Stein of Eveleigh Books & Stamps of Dover, Massachusetts in booth 1 at the shadow fair. I have visited both at their home offices during preparations and now come to the fairs to see how they are doing.