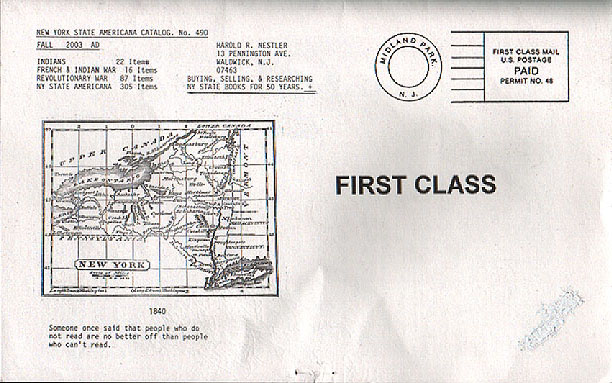 
There are a couple of items for those interested in 19th century Cuba. Maturin Ballou’s Due South Cuba Past & Present recounts the author’s observations from 1884. Item 140. $75. Marching with Gomez by Grover Flint is a war correspondent’s notes traveling with the military of Cuba in 1896. Item 141. $55.

Most Americans outside of the faith associate the Mormons with Utah, but there have been communities in Mexico. One such community is described in 1972’s Colonia Morelos: A Short History of a Mormon Colony in Sonora, Mexico. Item 91. $20.

There were many plans to build a canal before the Panama route was chosen. One related document is Jose Ramirez’s 1852 Statement of the Right…on the Part of the Mexican States for Not Recognizing…the Privilege Granted to D. Jose Gray, for Opening of a Line of Communication Between the Atlantic and Pacific Seas, through the Isthmus of Tehuantepec. Item 456. $100. Evidently this was not sufficient to kill the idea, as item 94, from 1872, is entitled Reports of Explorations & Surveys, to Ascertain the Practicability of a Ship-Canal Between the Atlantic & Pacific Oceans, by the Way of the Isthmus of Tehuantepec. Fortunately, Panama was chosen. Otherwise, we’d all have to be pronouncing the “Tehuantepec Canal.” $185.

Finally, for those with a little more spending money, there’s Frederick Starr’s Indians of Southern Mexico. This book includes 141 photographs from some of the deepest recesses of Mexico at the time (1899), most by noted ethnographic photographer Charles B. Lang. This is a first and limited edition (500 copies) and is signed. Item 504. $2,000.

Our final catalogue comes from longtime bookseller Harold R. Nestler. It’s “New York State Americana Catalog No. 490. Fall 2003 AD.” It is a collection of 432 books, manuscripts, maps and pictures related to New York. If you collect or have connections to New York, you will enjoy this catalogue. Nestler includes many of his own comments which make the catalogue as entertaining as it is informative.