An Inscription from Truman Capote to Harry Potter - What Is Real? 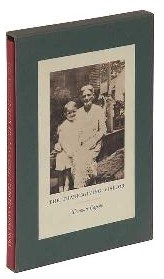 A little while back, we reviewed the wonderful new autograph guide published by autograph dealer The Raab Collection (click here). Among the reams of information provided by Steven and Jonas Raab are guidelines to avoid fake or forged signatures. Within this area is a subset, the not fake but misleading signature. This is the authentic signature of someone who is not who you think he is (and probably, his autograph is worth a whole lot less).

Other examples include descendants. Charles Dickens' son was also named Charles Dickens, and his signature was very similar to his father's. U.S. Grant's grandson was also a U.S. Grant, and he, too, had a signature similar to that of his famous forebearer. When you run into such signatures, you should check factors such as context, place, and most notably date. While there may be some overlapping, the chances are the people wrote letters during different times. Grant the third was not born until after his grandfather died, so a date will immediately distinguish these two.

All of this brings us to a curiosity AbeBooks recently came across on their website. It was a copy of Truman Capote's The Thanksgiving Visitor, inscribed by Capote to Harry Potter. Harry Potter? Can this be authentic? Evidently, it is. It is Capote's real signature. What about the recipient? We all know Harry Potter is a figment of J.K. Rowling's imagination. No amount of wizardry can make him real. Was Capote really gullible, or playing along with a joke? The answer is neither. A little chronological knowledge will solve this riddle, and save you from making a very embarrassing mistake. Capote died in 1984. The young wizard Potter was not "born" until 1997. Not only was Capote not inscribing the book to the Harry Potter we know, he would not even have been able to appreciate the irony in the inscription he was writing. You got the joke, but Truman did not.

As it turns out, the Harry Potter to whom Capote inscribed this book was a physician from New Jersey. Perhaps this Harry Potter conducted wizardry with a scalpel, but not with a broom. He may have received a degree from Harvard or Yale, but certainly not Hogwarts. If he made someone "disappear," that person can probably be found in Giants Stadium. We know nothing of the real Harry Potter save that he was real. This Harry gets to reside in the nonfiction aisle. And buyers, armed with a little knowledge, get to avoid confusing fiction with facts.