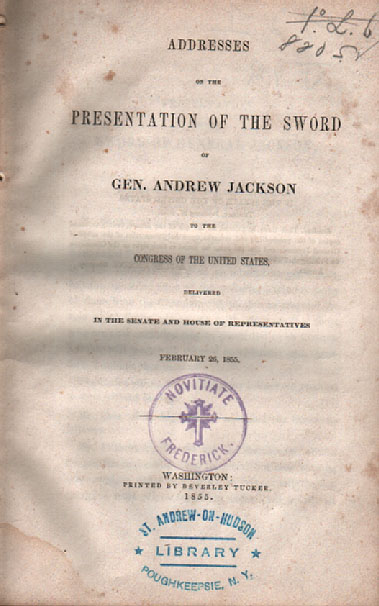 
I first went to the Americana Exchange Database (ÆD) to see what I could learn about these titles. The answer was not much. When older works like these, particularly steeped in American history, barely even show up in the ÆD, it means one of two things: (1) this book is so rare that the great bibliographers missed it, and the great book dealers and auction houses never had a copy to sell, or (2) the book is so commonplace that the bibliographers thought it unimportant and the value so low that booksellers didn’t think it worthy of space in their catalogues. Unfortunately, the latter is more likely to be the case.

Only one listing for either of these books showed up in the ÆD. That was for the King book in Sabin’s extensive Bibliotheca Americana. Sabin didn’t miss much, although he did miss Jackson’s sword. However, I did find one variant from the Sabin record. Sabin showed the printer of King as Beverley Tucker. Beverley Tucker did print my Jackson book, but King was printed by one Robert Armstrong. Maybe this will add to its value?

Next stop was to look at Abebooks.com. This is the world’s largest online old book retailer, with over 40 million books up for sale. Here’s where you can tell whether a book is rare or common. Here’s where your dreams die.

Fifteen copies of King are for sale, with prices ranging from $10-$125. Most are under $30. And the Armstrong printing appears equally as common as the Tucker printing. Based on the descriptions, I’d say mine fits in with the $15 copies. And while I see some of the sellers describe this title as “rare,” “unusual,” and “hard to locate,” I assume they’re just kidding.

However, there is one collector who should have this piece. Anyone collecting political works concerning Alabama needs this book. There’s not a lot out there about King, but he is a major figure in Alabama’s history. After serving in the House of Representatives as a representative from North Carolina, King emigrated to Alabama, served at the convention called to write their constitution, was one of the state’s first two senators, and served in the Senate almost continuously (with the exception of a stint as Ambassador to France) from 1819 until illness forced him to resign in 1852, three months before being sworn in as vice-president. I don’t know whether this obscure figure is still remembered in Alabama, but he should be.

As for my other title, Andrew Jackson is still well remembered, even if his sword has been forgotten. Congress, having no place to display the sword, transferred it to the Smithsonian in 1922. However, my book remains in circulation. Twenty-three copies can be found on Abebooks for prices ranging from $6.00 to $62.50. There doesn’t appear to be much difference between the lower and higher priced copies. Perhaps my copy is worth $15.