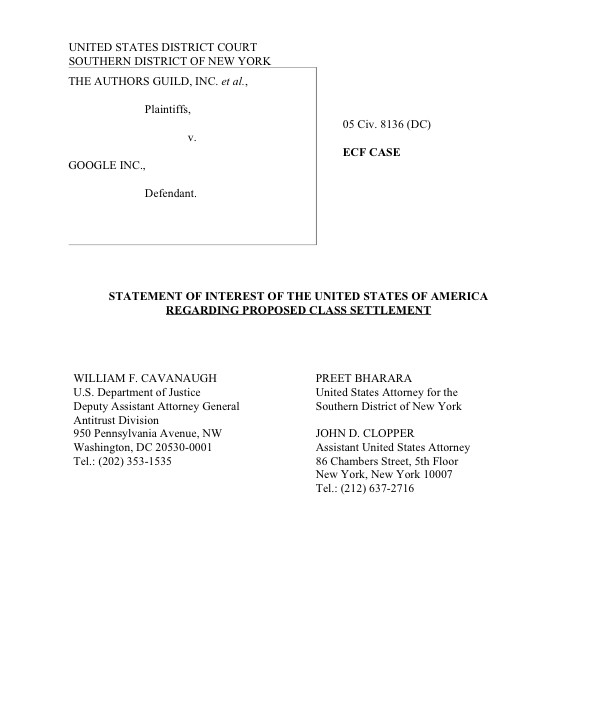 The government files a brief opposing the Google Books settlement.

The settlement between Google and groups representing authors and publishers that would allow the internet giant to make the text of out-of-print books available to the public has hit a snag. The settlement has had numerous opponents, including some authors and publishers, various European nations, Google competitors Microsoft, Yahoo and Amazon, certain library groups, and various others. Now add to that one more - the United States Federal Government. The Department of Justice filed an objection with the court just before the deadline of September 21. As a result, the Federal Court in New York hearing this case immediately postponed its final hearing scheduled for October 7. Instead, a status conference is planned for November 6, at which point the parties to the settlement are expected to have made changes needed to address the Department of Justice concerns.

The Open Book Alliance, a group of objectors formed to oppose the Google settlement, wasted no time in declaring the postponement a victory. "This has been seen by many as a clear victory for opponents to the settlement, as it acknowledges that even the parties involved recognize that the settlement, as it's currently written, is dead, and that any chance for revival requires making serious and fundamental changes," the Alliance posted on its website.

The settlement came out of a suit filed against Google by the Authors' Guild and Association of American Publishers. Google has been scanning millions of books from major libraries and making their digital copies available to the public through Google Books. They don't scan in-print books, and they have an unquestioned right to digitize books out of copyright, which includes anything published in America prior to 1923. However, Google had also been digitizing out-of-print books still under copyright protection. Normally the procedure would be to get permission of the copyright holder first. Unfortunately, many of these are so-called "orphan books," books legally under copyright, but the copyright holders cannot readily be found. They may be authors who died years ago, publishers that went out of business long ago. A requirement to first get their permission is tantamount to saying the book can never be digitized, its words unavailable to today's technology. So Google decided to scan first and ask questions later. The authors' and publishers' organizations sued on behalf of the copyright holders and agreed to a settlement whereby their parties would receive 63% of future sales, Google 37%.

This all sounds reasonable enough, but there are some problems. First of all, the government points out, this settlement becomes binding on all members of the "class" (copyright holders) unless those individuals opt out. However, many of those copyright holders aren't aware that their rights under copyright laws are being settled away, and the government does not believe an adequate attempt has been made to notify them. The Justice Department also expressed concerns that the rights of the unknown copyright holders are being represented by the known holders, whose interests may not be the same. Justice says that it "looks forward" to modifications to "minimize this conflict."

Justice's second objection involves potential antitrust issues. The first part of this issue is that prices are fixed through the 63%-37% formula and other factors such as to discourage price competition. The second part is that this settlement applies only to Google, and while it does not bar other would-be scanners from similar agreements, it requires they negotiate them lawfully. However, Google, to obtain this settlement, acted extra-lawfully, that is they violated copyright law by publishing these works, were sued, and then reached a settlement. The best others could hope to do is violate the law themselves and then reach a settlement after they were sued, which the settlement forbids. Additionally, the agreement provides that other scanners could not obtain a settlement with better terms than the one Google received, thereby prohibiting price negotiation.