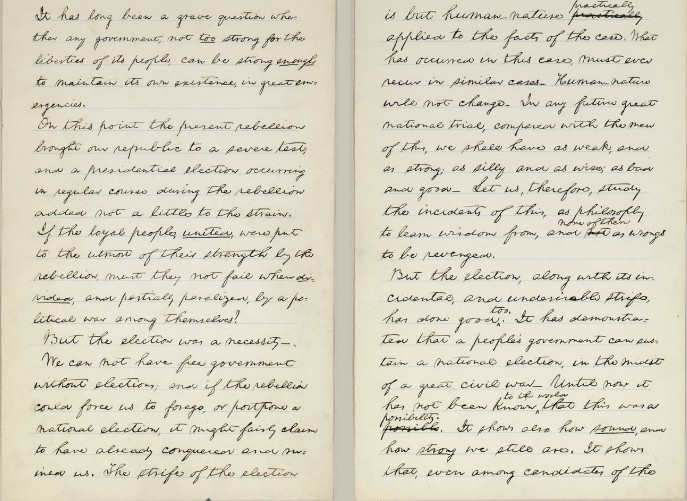 It took only 43 days of 2009 for last year's top price paid at auction in the book and manuscript category to be surpassed. The results could not be more fitting. The item was an Abraham Lincoln manuscript, and the auction was held on Lincoln's 200th birthday, February 12, 2009. It was a happy birthday for Lincoln and the small upstate New York library which previously owned the manuscript.

The item was a handwritten copy of the speech Lincoln gave from a White House window on November 10, 1864, two days after he was reelected to the presidency. Earlier in the year, it appeared doubtful this day would ever come. Even as late as that summer, Lincoln appeared to be badly trailing his Democratic opponent, the former leader of the Union Army, General George McClellan. McClellan ran on a "peace" platform that effectively meant capitulation to the Confederacy and a return to slavery. Nevertheless, the North was tired of the long, and seemingly unsuccessful war. They had had enough.

All of this turned around at the end of summer when Sherman marched through Georgia and captured Atlanta. What had appeared to be an unending stalemate turned sharply in favor of the Union. Victory, so long elusive, seemed almost certain now. Lincoln's popularity was restored and he swept to a decisive reelection. And so, two evenings later, with a large celebratory crowd gathered on the White House lawn, Lincoln appeared at one of the windows, and to candlelight read the speech sold last month at Christie's in New York. In his speech, Lincoln, as always, remained firm to his purpose while being conciliatory to those who had opposed him. Of particular note in this speech, Lincoln focused on the importance of holding free elections, even in the midst of war. Lincoln states that the election "... was a necessity," for "we cannot have free government without elections; and if the rebellion could force us to forego, or postpone a national election, it might fairly claim to have already conquered and ruined us."

Lincoln's letter sold to an anonymous telephone bidder for $3,442,500. That tops the most expensive item at auction last year, another Lincoln document, which sold for $3,401,000. That item was a letter Lincoln wrote to some schoolchildren concerning slavery.

The victory manuscript came with its own interesting history. When Lincoln died, his papers, some 20,000 documents in all, went to his son Robert Todd Lincoln, the only Lincoln child to survive to adulthood. Robert, who served as Secretary of War in the Garfield and Arthur administrations, and as Minister to Great Britain in the Harrison administration, carefully guarded his father's papers. However, he occasionally gave away documents his father had written or signed to people who had in some way notably honored his father. Such was the case with the victory speech, given away in 1916. A few years later, Robert Lincoln would turn all of the remainder of his father's papers over to the Library of Congress, where they remain today.

This speech was given to New York Congressman John W. Dwight. Dwight had been instrumental in getting funding from Congress for the Lincoln Memorial in Washington. Included in the auction lot with Lincoln's speech was his son's letter to Dwight expressing his appreciation and presenting him with the document. In 1926, Dwight gave the Lincoln speech to his hometown library, that being the Southworth Library in the small upstate New York town of Dryden, east of Ithaca. There it has remained, rarely seen over the years. It was displayed during the bicentennial in 1976, but most of the time it was kept in a secure, off-site location. Finally, the library decided it made sense to sell the unseen letter to raise the funds necessary to expand their building.