Book Prices Down 30% Year Over Year at Auction 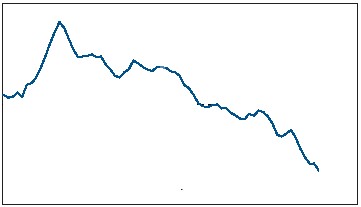 Book prices at auction have been slipping.

Book prices at auction showed a continuing sharp decline during the first two months of 2009. The median price at auction for the period was 31% lower than for the same period a year ago. This compares to a decline of 21% for all of last year compared to 2007.

While the smaller sampling available for two months versus a year leaves a greater margin of error, there is no mistaking that there has been a very substantial decline in book prices at auction. However, the implication that prices have slipped further in 2009 is not necessarily true. Last year's 21% decline included sales from the first half of the year, when the market was still relatively strong. The decline was likely steeper in the last half of the year. The current estimated 31% drop may reflect the level of decline already in place by the last half of 2008, rather than further deterioration of the market in 2009. It will take more time to determine whether book prices are continuing to fall or have begun to bottom out.

What has been happening to prices at the bookseller level is less clear since such sales are not conducted in a visible marketplace as are auctions. However, anecdotal observation does not indicate a decrease in listing prices of anything near the 30% level. Most sellers appear to be opting for reduced sales over reduced prices. In a challenging economic environment such as the current one, sellers have three choices: (1) lower asking prices, (2) maintain asking prices but discount and bargain more aggressively, or (3) maintain current prices and wait for recovery. While it is impossible to know what kind of dealing may be going on behind the scenes, anecdotal reports we have from booksellers indicate sales are down, implying that most are holding fairly closely to past pricing.

Reports we received from sellers at the recent California Book Fair would support the belief that sales, rather than prices, are down at the bookseller level. Sales between dealers in the pre-opening period were reportedly very slow, indicating a great reluctance on the part of sellers to purchase new inventory. When sellers are selling, they need to replenish inventory. This is a sign that most dealers appear to be in a wait-and-see mode, rather than aggressively discounting in an attempt to boost sales.

What booksellers will do, or should do, in the days ahead is far less clear. Decisions will be made based on the immediacy of a dealer's need for cash and his or her belief in how long it will take for the market to recover. Those dealers in a strong financial condition may choose to wait out the storm. Those who will need greater cash flow in the months ahead may be better advised to start developing new strategies sooner rather than later. Recovery will come, but it appears almost certain that the time frame will be years, not months. Those whose survival under current conditions will be limited to months need to make adjustments now before time further erodes their financial strength. A business model that depends on a market turnaround by summer appears almost certain to be destined for failure. Even the more optimistic of economic forecasters do not see a recovery beginning until late in the year, and that does not mean prices will suddenly rebound by 30%. That simply means a slow return to growth. Other forecasters believe it will be years before real recovery comes. We do not mean to sound pessimistic, or be the bearer of bad news, but auction prices are a firm reality check for the book business. We believe the bookseller armed with realistic, even if unpleasant data, has a better chance of surviving and succeeding than one who builds a business model based on wishful thinking.