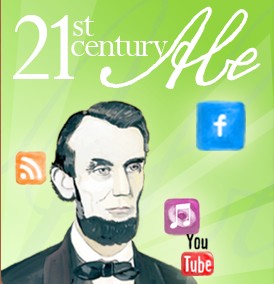 21st Century Abe from the Rosenbach.

The Rosenbach Museum and Library has announced a special online project sponsored in conjunction with a very special birthday - the 200th for Abraham Lincoln. On February 12, 1809, Lincoln was born in a one-room log cabin in Kentucky. The rest, as they say, is history. Now we all get a chance to relive a piece of that history.

On February 12, 2008, the Rosenbach will be launching a project called 21st-Century Abe. However, you don't have to wait until then for a preview. A blog introducing the project is already live at the 21st-Century Abe website. The blog will allow visitors a preview of the project along with adding their own comments about this 200-year-old man who is still such a dominant figure in American culture.

On February 12th, the complete project will be rolled out. Then, you will be able to access Lincoln material from the Rosenbach collection, along with creative interpretations from various scholars, artists, musicians and others. It will provide an opportunity to see the real Lincoln, and understand his views on issues of the times, many of which we still wrestle with today. The timing could not be more appropriate, for not only is it Abe's 200th birthday, but a time when we have just witnessed another man from Illinois rise to the presidency. Remarkably, had that man lived in much of the United States when Lincoln took office, he could have been a slave, and Lincoln would have been the man who freed him. The Rosenbach's timing could not have been better.