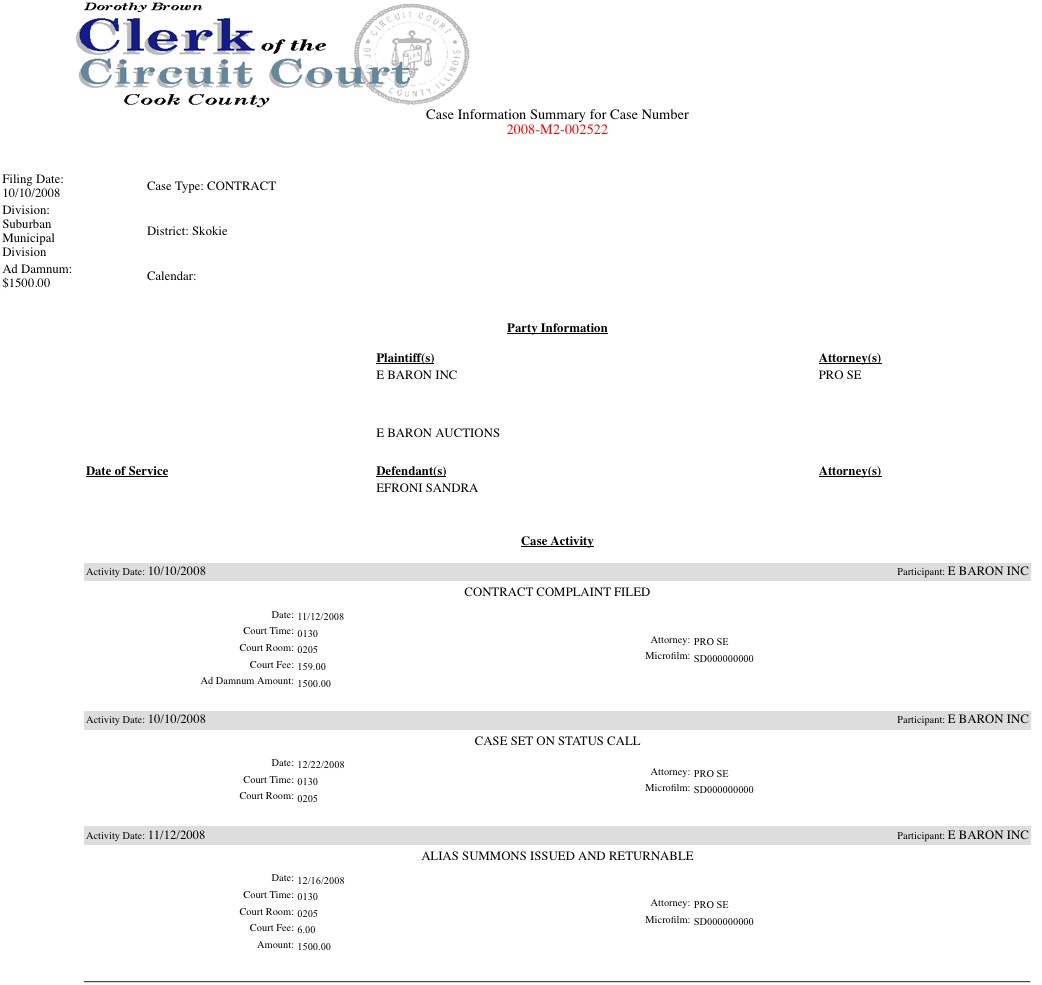 The legal filing from the eBay ratings dispute.


The buyer was less than ecstatic about the transaction, and so she posted negative feedback, not the worst, certainly, but still a demerit in the eBay system. Her feedback stated, "Bad experience. Did not honor his word for months. Excessive S&H. Only one box!"

Now we can see the problem. The buyer was dissatisfied for reasons that had nothing to do with misrepresentation or the like. She was unhappy it took the seller so long to repost the item, she felt $8.49 was too much to pay for shipping a $4.99 item, and she felt both coins should have a box. However, all of this was clear from the seller's listing. He was under no obligation to repost, his shipping charge was clearly posted with the listing, and the description spoke only of the gold medal having a box. The listing was not deceptive, and the buyer had no obligation to bid if she was unhappy with the clearly stated terms. Nevertheless, she was still unhappy with the seller and eBay encouraged her to post any unhappiness for any reason without fear of retaliation. Meanwhile, the seller, who was completely straightforward in his presentation, felt the negative feedback could damage his reputation. And, he had no recourse through eBay.

What is a seller to do? Normally, he would let the comment roll off his back and move on. The seller has 99% positive feedback, and an occasional bad comment probably won't destroy a business. Nonetheless, he must have felt the unfairness of this complaint warranted some sort of response, and since eBay provided no means, he went to the only source he could find - the courts.

On October 10, 2008, E Baron, Inc., acting pro se (without an attorney), filed a complaint in the Cook County (Illinois) Circuit Court against Sandra Efroni. The plaintiff asks for $1,500, apparently for damages for some sort of libel or slander. According to the filing, the court fee is $159, meaning the plaintiff already has far more invested in this case than the transaction was worth. According to postings on the message boards, the defendant is out of work and in no position to afford to hire an attorney in Illinois. We are not sure what will happen from here, but unless the case is dropped, the costs are likely to mount. We are not familiar with Illinois law, but while this strikes us as a tough case for the plaintiff (he probably must establish that these comments are untrue, slanderous, and have caused him harm), he could win by default if the defendant does not appear in Illinois. However, he would then bear the costs of going to court in California to sue for payment on the judgment. All of this appears difficult, unpleasant, and costly for all concerned. Such disputes should not come to this, though perhaps in the future, they increasingly will.

Ebay has shown little inclination to get involved in such disputes. Perhaps they do not want responsibility, or do not want to pay employees to resolve disputes. However, eBay is no disinterested observer, no uninvolved matchmaker. Ebay is intimately involved in each transaction, collects a commission on them, and has provided a feedback system which can help the parties, but is also subject to abuse or misunderstanding. They have created the system that has led to this nightmare, where a seller can be subject to unanswerable, unfair criticisms, and buyers can be sued for expressing their honest, if sometimes misguided, opinions (which eBay encourages them to do). Ebay needs to stand up and play its role to resolve such disputes in a rational manner, or else the eBay experience will deteriorate for all involved.