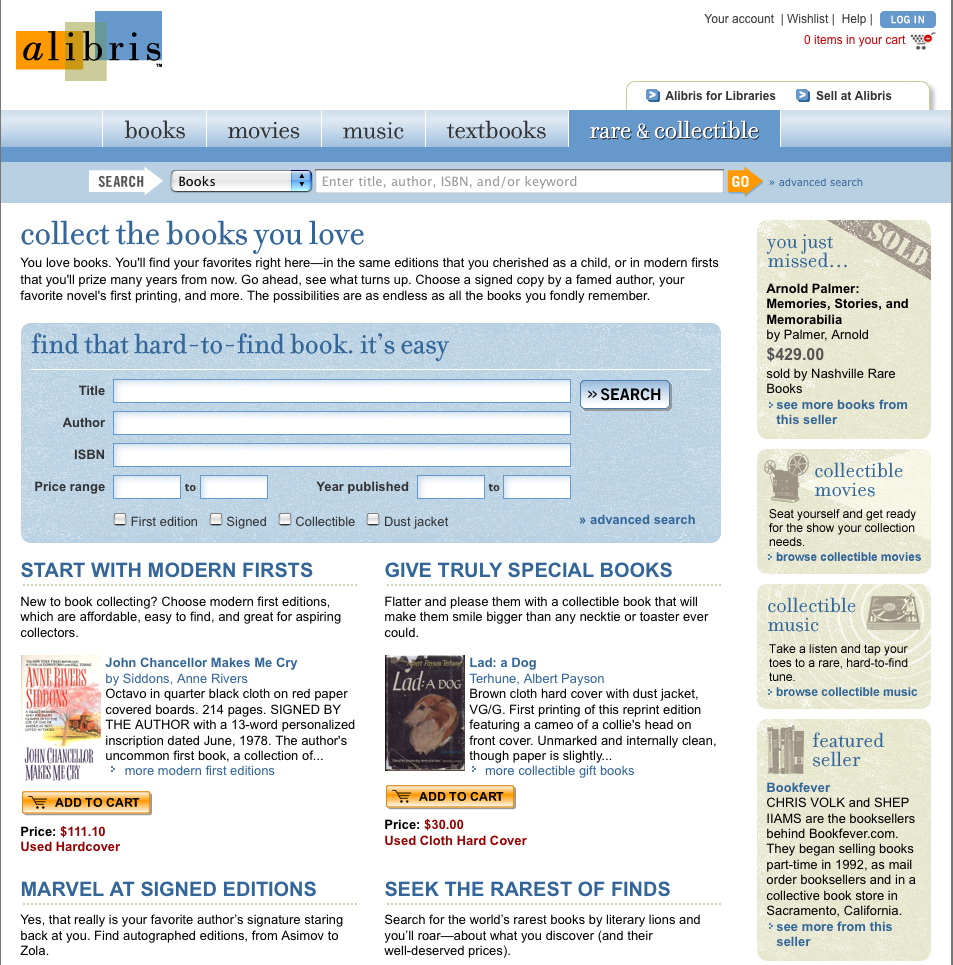 Alibris announced the opening of a new section of their website designed to snare more buyers in what looks to be a difficult holiday shopping season. Alibris' primary business is used books (they also sell music and movies), and few reading this article are unaware that these are tough times for booksellers. The book trade was already dealing with a decrease in reading (of printed text anyway), a glut of old books available online, and the increasing availability of electronic texts of old books, when the terrible economic downturn and recession hit. With four strikes against you, it's hard to hit one out of the park. So, Alibris' intentions here are good, though a successful execution will be challenging.

Alibris has launched what it calls its Rare and Collectible store. It encourages collecting by featuring notable editions and essays on book collecting, such as one on modern first editions by noted bookseller Ken Lopez. The idea here is to encourage more people to collect books. What bookseller would be against that? Most of what has been sold on the listing sites has been better categorized as "used books," inexpensive copies sold for reading and research, not collecting and keeping. However, that segment is most susceptible to competition from oversupply and electronic texts. Collecting rare books is not, though it is hardly immune from the weak economy or decreased interest in the printed text. Still, it's better to bat with two strikes than four.

Alibris has added an interesting twist to its promotion of book collecting. Rather than targeting the existing collector, they are encouraging the new collector. Their rare and collectible page suggests people collect books they recall from childhood, first editions of favorite books, or signed copies by famous authors. "The possibilities are as endless as all the books you fondly remember."

Alibris then takes the concept one step further by encouraging customers to buy collectible books as gifts for friends. In a release announcing the new section, Alibris President and CEO Brian Elliott asks, "Why spend $20 on a boring gift certificate this holiday season when you could find a much more meaningful, collectible book, LP, or movie instead?" He goes on to note, carrying on the baseball metaphor, "I recently started my holiday shopping by picking a first edition of Summerland that was signed by author Michael Chabon and was being sold on Alibris for only $18 - a bargain and a homerun gift for someone on my gift list." Inflict a case of bibliomania on your friends! This is truly the gift that keeps on giving.

Of course, those who collect see bibliomania as a joy, a true gift. Finding a way of turning those who love collecting into ambassadors for the pursuit is essential to the health of the field. A gift of a rare book may have the same effect as the gift of a stamp album to a child. That's probably where most stamp collectors begin. Alibris' intentions are right here, and the idea is good. Actually convincing people to become collectors or give rare books as gifts, however, is easier said than done.