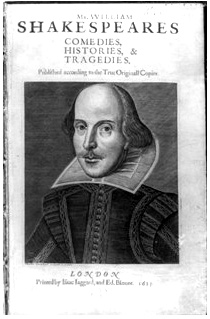 First folios are in the news.

The man accused of stealing a Shakespeare First Folio from the Durham University Library (UK) was rearrested last month as a result of additional evidence gathered in the case. Raymond Scott, 51, of Washington, County Tyne and Wear, UK, was originally charged back in August after showing up at the Folger Library in the other Washington (DC, US) with a copy of a first folio, seeking to have it authenticated. He claimed to have been representing a Cuban owner whose family held the copy for a century. However, the expert called in by the Folger identified it as the one stolen from Durham a decade earlier.

The flamboyant Scott met with reporters shortly after his first arrest to proclaim his innocence. He explained that he was representing the Cuban family as they were unable to take the book out of the country. The owners had come to trust him through a connection to his Cuban girlfriend. Scott was noted back home for his high living - fancy cars, foreign travel, expensive suits and a rare book collection, all despite living on a small pension (he attributed his finances to gifts from his widowed, and not obviously wealthy, mother). If all of this was enough in itself to train suspicions on Mr. Scott, it turns out that the UK version of Washington is just a few miles down the road from Durham University. This may not be sufficient to prove anything, but I sure wouldn't want to have to explain that to Nancy Grace.

Scott has since made bail and remains adamant in his proclamations of innocence, along with saying he feels "persecuted." He dismissed expert comparisons between the Durham copy and the one he brought to the Folger, commenting that they looked for similarities between the copies, but not differences. Meanwhile, he has sought the return of the copy from Durham.

In some brighter Shakespearean news, another first folio and many other works of the Bard will be returning from America to England under much happier circumstances. American collector John Wolfson has pledged his collection of 450 Shakespeare items to the Globe theater of London. The Globe is a recreation of the old theater where Shakespeare's plays were originally performed. The new Globe includes a research center which will house the collection. Wolfson stated that he did not want to see his collection, thirty years in the making, broken up when he passes on. This way it will remain intact in a place logical for Shakespearean research. No value has been placed on the collection, but one can be assured that the figure is quite high.

Barnes and Noble moved from a third quarter profit last year to a loss this year, according to its recently released financial results. Perhaps most ominously, they recorded a same store sales decline of 7.4% compared to last year. According to CEO Steve Riggio, "A significant drop off in customer traffic and consumer spending impacted our business in the third quarter." The bookseller now anticipates a decline of 6%-9% for the all-important fourth quarter, which includes the holiday season. Meanwhile, Borders revenue tumbled by almost 10% in the third quarter compared to last year.