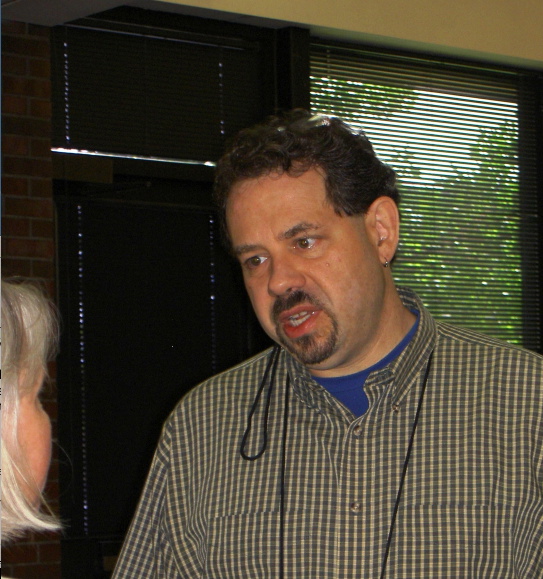 I looked up "meta" in the dictionary and it can mean "among" or "with" or "change." I love being 'among books' and so does Tim Lohraff. While studying my brains out at the Colorado Antiquarian Book Seminar in August, I met Tim, who is 47 years-old, and who is opening Meta Books, a general used book store in Tacoma, Washington, in November 2008.

It may seem like opening a bookstore is a gutsy thing to do in this economic climate, but Tim is no dummy. He has done a lot of research and he has a little edge that will mean he can probably make a success of Meta Books in spite of the trashed economy. Meta Books will be located on the University of Washington campus in Tacoma and the campus is his landlord. It is a brand new building, the store has 1200 square feet, and besides the school, there are two excellent museums on his street as well as a yummy Pan Asian Restaurant called Indochine next door to the bookstore.

We asked him why he picked Tacoma instead of Seattle. "Seattle is oversaturated with bookstores and rents are very expensive. Tacoma is up and coming. U-Washington was formerly a two-year school, but now it offers fully accredited four-year degrees in a number of subjects. The students will be a great audience."

It is always fascinating to me how people get into the book business, and Tim is a perfect example. He was, until last month, a defense attorney. He did his undergraduate work at the University of Michigan in Ann Arbor and got his law degree at University of Illinois at Champaign. I asked him about his background and how he evolved from being a defense attorney to being a bookseller.

"Three major factors," he replied. "First, when I was in sixth grade, I read Attorney for the Damned by Irving Stone. From then on, Clarence Darrow was my hero growing up. He was not only a great defense attorney, but a progressive and a social activist. He was anti-death penalty and he was based in Chicago, near where I lived. Second, when I was a senior at the University of Michigan, I worked for a semester as an intern at the public defender's office. I enjoyed seeing the work they were doing and the camaraderie. It seemed to me to be socially useful work. Third, when I was a senior at U-Michigan, I was looking into either law school or English Lit for my PhD. I did some research and found that English majors had a tough time finding jobs, and I opted for Law. I wanted to do some kind of social activist law - environmental, criminal, or ACLU-type stuff. After I left school, I took a job at the Cook County Public Defender's Office, beginning with misdemeanors and working my way up to every sort of felony from battery, to rape, to murder. After seven years of that, I pretty well burned out and was hired into a friend's private practice doing civil rights litigation such as suing police for unlawful and excessive force. It was the People's Law Office. They are quite famous. They started small, defending one of the Chicago Black Panthers and went on to represent people on death row and to do Rodney King-type cases. I eventually became a partner there. One client in particular was a wrongfully-convicted Hispanic man, placed on death row. We took on his case, got him exonerated after eleven years in jail, and he was released."