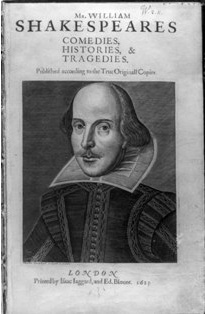 The missing Durham University copy of the Shakespeare first folio is believed to have been found by the Folger Shakespeare Library in Washington, D.C. We say "believed" because the man who brought it to the Folger denies it is the Durham copy. However, experts at the Folger believe it is, and Durham University is quite certain. This is no insignificant matter as a first folio has a street value somewhere in the $20-$30 million range (the Durham copy has defects so the value may be considerably lower).

This story began ten years ago when a 1623 Shakespeare first folio was stolen from the library of Durham University in northeastern U.K. This work has been variously described as "irreplaceable," "priceless," and "the most important book in the English language." The first two of those are, of course, incorrect. It isn't irreplaceable as there are a couple hundred of these things still around, and as previously noted, there is a price tag, albeit $20 million+. However the description as the most important English language book most likely is true.

This was not the only item stolen from Durham at the time. A fragment of a Chaucer poem in a 15th century manuscript, along with a couple of other valuable, though not on the first folio level, items were also taken. Durham University reports that it has significantly improved its security since then. We surely hope so.

So for ten years, the Durham first folio remained missing. Then, one day last month, a man walked into the Folger Library with a first folio under his arm. He reportedly described himself as a businessman who had brought the book from Cuba. He wished to have the Folger examine and determine the book's authenticity. Now, it's not everyday that a person walks into the Folger with a first folio, even if that library does hold the world's largest collection of them (an incredible 79 copies). In fact, this was the first time anyone ever walked in off the street with a copy without even making an appointment. That in itself undoubtedly set off alarms. And the idea that a $20-$30 million book would have come from Cuba, the world's last seriously Communist nation, where everyone is theoretically a happy laborer, must have been particularly incongruous. The Folger immediately checked its missing first folios list, which led to a thorough comparison with every known detail about the missing Durham copy. After a few days of digging, the Folger concluded that this was indeed the Durham copy.

Back in England, the folks at Durham University were ecstatic. On its website, the university noted, "Durham University is rejoicing following news that a stolen rare Shakespeare book is returning home." Meanwhile, British police tracked down the man who brought the book to the Folger. Arrested was 51-year-old Raymond Scott, an eccentric and flamboyant bibliophile of sorts, who promptly denied his copy was the one stolen from Durham. His story was one that the police undoubtedly found unbelievable, as they clearly don't believe him, but Scott is entitled to his day in court.

Scott lives in the small town of Washington (there's a coincidence), in county Tyne and Wear, in northeastern England. This Washington was not named after George (he probably isn't that great a hero in the old country), though it may, or may not, be named for some of his distant ancestors. Now here's another coincidence. The little village of Washington is located just a few miles from Durham University. This undoubtedly made the police even more suspicious, as Cuba is much farther than that from Washington, U.K.