Do You Have A First Edition <i>Origin Of Species?</i> If So, The Darwin Census Wants You 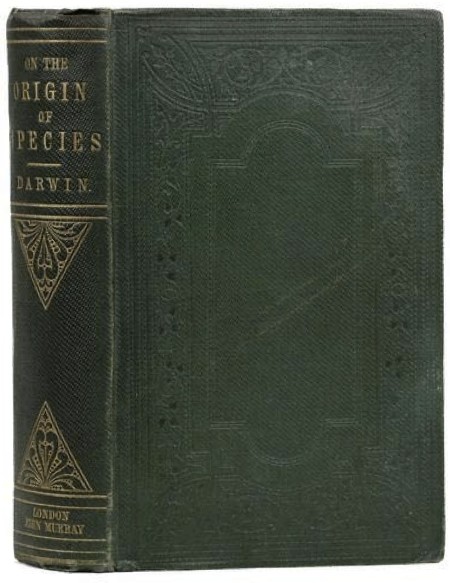 A first edition of On The Origin of Species.

Do you have a copy of the first edition of Charles Darwin's On The Origin of Species? If so, the Darwin Census is looking for you. The Darwin Census is conducting a worldwide search for all first edition copies of this enormously important and influential work. It plans to use the census to create a database of all known copies still in existence, and better understand the details of this printing by discovering its variants.

The project is being undertaken at the University of Cambridge, with Angus Carroll serving as project manager. Here is what they already know. The first edition was published in 1859 by John Murray. They recorded a print run of 1,250 copies. It went on sale on November 24, and sold out the same day. There are known to be certain variants in the first edition. There is a difference in the width of the word "London" on the spine of the original binding, and at least four variations in the advertising pages at the back (including no advertisements). There may well be additional variants not yet identified.

The first objective of the census is to locate and keep track of as many copies as possible of the Origin. Additionally, the Census will strive to learn more about the great work, including three principal goals: (1) to establish the frequency of the known variants; (2) to identify any unknown variants; and (3) to locate missing presentation copies. It is hoped that this last goal will help scholars better understand how the book was received through annotations made by Darwin's contemporaries.

The results of this census will be published next year by Darwin Online. However, ownership information about individual copies will be kept confidential if their owners so desire. The census is timed to be published in 2009, which is the 150th anniversary of the publishing of the Origin of Species, and the 200th birthday of Charles Darwin.

The Census Project has been able to locate many, likely most copies held in libraries and other institutions. However, some such copies are undoubtedly still unaccounted for. What they most need your help with is locating copies that are held by private collectors or booksellers. These are the copies most difficult to find. If you own such a copy, you are requested to contact the Darwin Census. They have a form you can fill out which comes with much helpful guidance, such as where to look for the variants. If you know someone else who has a copy, please pass this message along to that person so he or she will know that the Census is seeking this information.

To learn more about the census, download forms, and respond, please go to the following website: http://darwin-online.org.uk/DarwinCensus.html. You may also contact the Darwin Census by email at darwin.census@gmail.com.