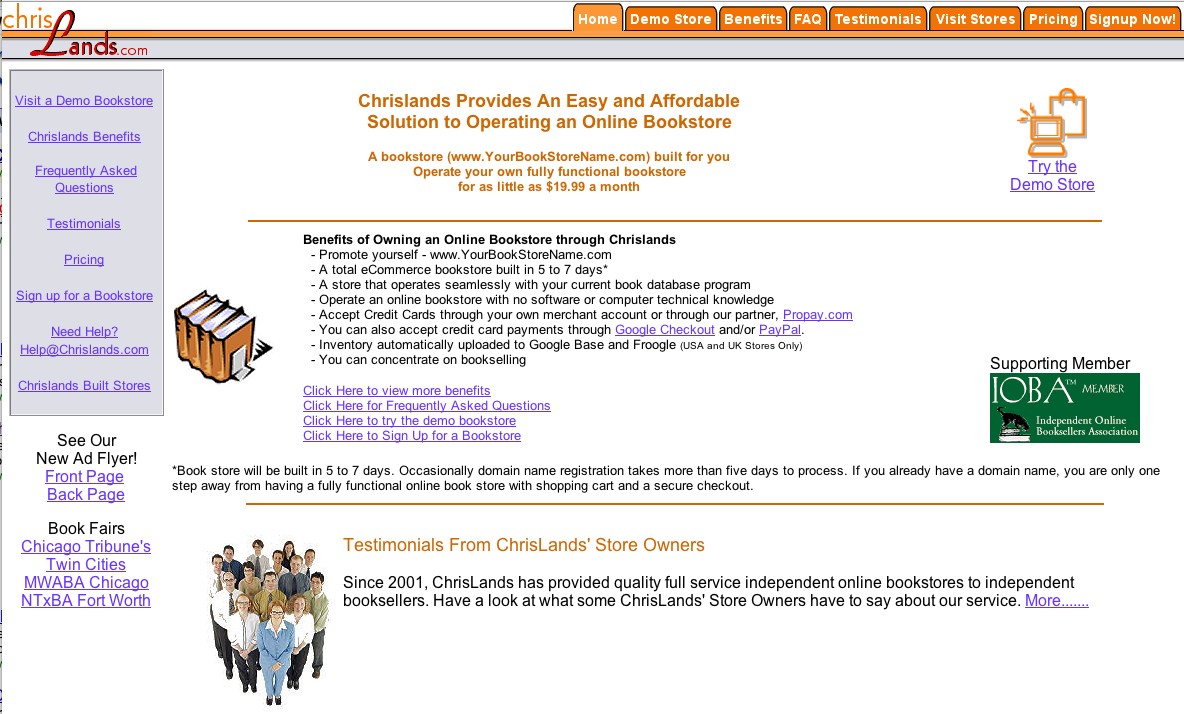 April was a busy month for leading online used bookseller AbeBooks.com. First, on April 9, they announced the purchase of Chrislands, a firm that builds, hosts and maintains bookselling websites for independent dealers. Five days later, they announced the opening of an Italian version of their website, AbeBooks.it.

Founded in 2001, Chrislands now hosts more than 1,000 bookselling sites. What the firm does is provide an internet package for booksellers who wish to have their own website. Their software contains all of the programs necessary to run an online bookstore. This includes a database to store listings and a search engine to find them, a shopping cart and secure order processing, and software that enables each bookseller to establish his own identity. Tools are provided for booksellers to operate their site without specialized computer knowledge. Chrislands charges a set-up fee of $199, and a monthly fee starting at $19.99 (depending on inventory size) to host and maintain the dealer's site.

This is hardly the first purchase by AbeBooks. Previous purchases included European online bookselling sites JustBooks and IberLibro, multi-site book searcher BookFinder, and inventory management provider FillZ. We asked AbeBooks' PR Director Richard Davies what the thread was behind these seemingly disparate purchases. He explained, "When looking at a possible acquisition, we look for three things: 1) is the company book-related; 2) is it successful; 3) is there opportunity for growth? Chrislands checks all these boxes." He further noted, "We are diversifying our business but always remaining close to books."

We asked whether any changes were in store, to which Mr. Davies answered, "The acquisition of Chrislands has been completed in a very similar style to our purchase of BookFinder.com in 2005." In other words, the short answer is "no." BookFinder has been allowed to continue to operate in an independent fashion, and Abe has not used its position to gain advantage, such as priority in results displayed. Davies went to say, "Chrislands will continue to operate as an independent business with Lance and Jaymes [Chrislands owner/founders Lance Christen and Jaymes Sorbel] remaining at the helm. Lance and Jaymes even consulted with BookFinder's founders Anirvan and Charlie before agreeing to the acquisition. There are no plans to change the Chrislands fees or offer discounts to existing AbeBooks' sellers. We plan to give Chrislands access to AbeBooks' resources, such as marketing, design and other companies within our family. Chrislands is already working closely with BookFinder.com so stores hosted by Chrislands will soon have the capability of including their inventory in BookFinder.com search results."

AbeBooks' second announcement was that they have opened an Italian edition of their website, joining versions in the UK, France, Germany, Spain, and, of course, North America. The formula is essentially the same. AbeBooks.it includes 1.4 million books offered by 98 Italian booksellers. Books sold by Italian dealers are listed first, the site is in the Italian language, and pricing is in Euros. However, books from all of the Abe sites, now around 110 million, are displayed on the AbeBooks.it site.

Asked whether Abe plans to add any more such country-specific sites, AbeBooks' PR Coordinator Scott Laming responded that while the firm is always looking to expand to new territories, there are no specific plans at the moment. We also asked what determines whether Abe will expand through a new Abe site, or a Gojaba site, such as recently opened in Russia and Sweden. Scott Laming responded that this "is decided on a case by case basis depending on the projected economic viability of bookselling in the region, the level of competition, internet penetration, the postal service, and the book culture and used bookselling heritage." Where these factors are similarly developed as in the nations currently hosting Abe sites, a local Abe version is established. If not, it is more likely to be a Gojaba site. He also noted that AbeBooks sites are not equipped to handle languages not based on the Latin alphabet, so a country with a Cyrillic alphabet, such as Russia, or other non-Latin one, is more likely to see a Gojaba site.