<i>In The News:</i> The Most Expensive American Letter Ever Auctioned, BookFinder, Via Libri & More 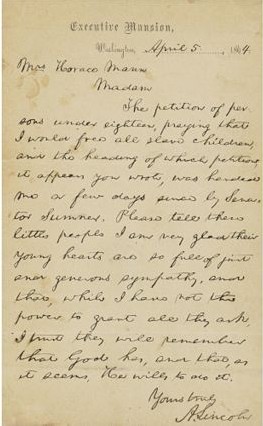 A fabulous Lincoln letter, magnificent both for its content and price, broke all kinds of U.S. auction records at Sotheby's last month. The President wrote the 1864 letter in response to a petition he had received from schoolchildren in the Concord, Massachusetts, class of Mary Mann, widow of famed educator and abolitionist Horace Mann. Their petition was headed "Petition of the children of the United States; (under 18 years) that the President will free all slave children." In his reply, Lincoln writes, "Please tell these little people I am very glad their young hearts are so full of just and generous sympathy, and that, while I have not the power to grant all they ask, I trust they will remember that God has, and that, as it seems, He wills to do it." If it sounds odd that Lincoln was not willing to free slaves in 1864, long after the Emancipation Proclamation, it must be remembered that the Proclamation only freed slaves in states in rebellion against the United States. Slavery was still legal in the border Union states of Missouri, Kentucky, Maryland, Delaware and West Virginia.

This letter was sold for a record price of $3,401,000. Sotheby's noted that this was not only a record price for a Lincoln manuscript, but for any presidential or any American manuscript ever sold at auction. It was sold to an unnamed American telephone bidder.

Another Lincoln highlight from the auction was the only known signature of the President signed at Gettysburg the day of his inspirational address. Lincoln's signature, along with those of a few other notables in attendance, such as Secretary of State William Seward, was written in a souvenir album. The album sold for $937,000. Another most notable letter came from an imprisoned John Brown, two weeks before his hanging. He reiterates the justness of his abolitionist cause, and makes an interesting point about his jailor, who fought bravely to capture Brown, but then evidently received much grief for treating him humanely. Pens Brown, "Cowards prove their courage by their ferocity. It may be done in that way with but little risk." Brown's letter sold for $82,000. In all, the American manuscript auction took in $5,649,330.

BookFinder, the multi-site book search engine, released a survey to make a point about bargains. They searched ten recent bestsellers on their site and did a comparison with the list prices. On average, they found used copies of recent books could be located online for 60% off the original price. They compared this to the 6% discount offered by a leading chain. At the top of the list was the most recent Harry Potter saga, that had people lined up at bookstores at midnight a few months back for the honor of paying the retail price of $34.99. BookFinder found copies as low as $6.73. BookFinder noted that unlike many other book sites, they provide prices which include shipping, so that 81% discount on Harry Potter is real.