A Chance to See One or Two Presidents 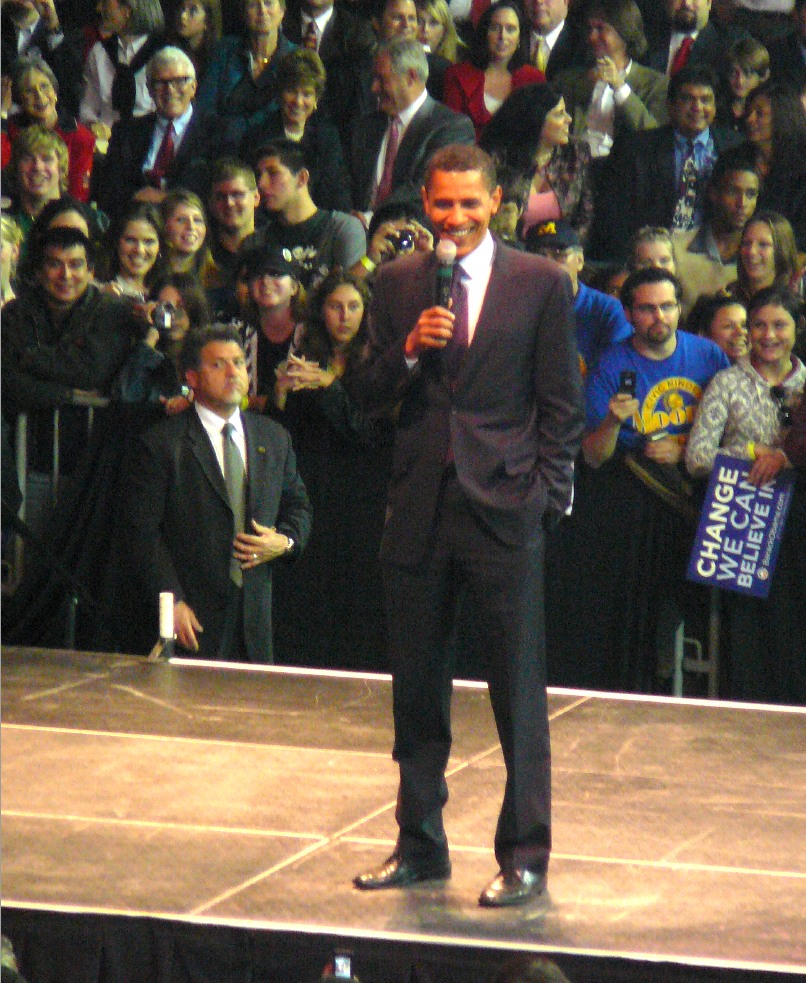 Barack Obama speaks to a large and enthusiastic group of followers.

For those fascinated by American history, there are few events more exciting than a presidential election. However, here in Texas, particularly a far corner, presidential elections are a distant spectator sport. Nobody important comes here. Nominations are sewn up before our primary, general elections a foregone conclusion. Not this year. For a brief time, a bizarre twist of fate has made us the center of the political universe. We matter. We are somebodies.

The South Texas town of Corpus Christi is a place you can't locate without a map. The closest we have come to having a visit from someone politically important in many years came when they brought Dick Cheney's shooting victim to our hospital. All that has changed. You would think this was New Hampshire if it weren't 90 degrees in February. In the past week and a half, we have been visited by Barack Obama and Hillary Clinton, Ted Kennedy and Bill Clinton. And these were not fundraisers, meeting behind closed doors with a few moneyed people. These were public forums where each side made their case. Perhaps if the Republicans had a contest we would have seen John McCain too, but that wrapped-up election has allowed him to get back to the serious business of raising money.

I would like to have seen them all, but time constraints limited me to a representative sample. And, I did get to hear one, maybe two, presidents - Barack Obama and Bill Clinton. At this point I must throw out a caution. If you like the Bush administration, there is not much more here for you. The watchword for both candidates is “change.” If you are hoping for a continuation of Bush policies, neither has anything to offer you. Their appeal is targeted strictly to those who want a change from George W's administration.

On Friday afternoon, I went to see Obama. The line began forming 12 hours before he was to speak. When I arrived four hours early, it was already snaking around the large auditorium, home to the local hockey team and the major concert venue, where he was to speak. Dedicated, well-organized Obama volunteers kept everything in order, from plying the lines selling buttons and drinks, to ushering us to our seats when the doors finally opened. Along the way, security guards forced us to empty our pockets and raise our arms while they patted us down with handheld Geiger counters, or whatever those metal detector things are. I was required to throw away a small penknife I had attached to my keychain before I could enter. I'm not sure what they thought I might do with it. Throw it at Obama from the stands? These guards could not be reasoned with. Into the trash it went.

We were led in an orderly file to our seats by Obama volunteers to wait another hour and a half for his arrival. We were given a brief talk by a state senator, a gentleman who went to law school with Obama. Otherwise, no local officials spoke. A college student provided the introduction. This did not bother the crowd, which had little need for established politicians. When Obama arrived, a mere ten minutes late, the crowd erupted with a standing ovation, and did not sit down again until Obama instructed us to sit.