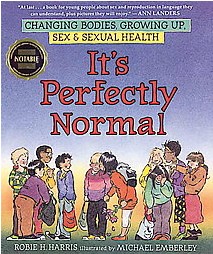 It's Perfectly Normal was the subject of an abnormal book theft.

A woman from Lewiston, Maine, has pleaded not guilty to a most unusual charge of book theft. JoAn Karkos took a book from her local library and refused to return it (unlike most library patrons who simply lose them). However, this was not traditional stealing, as she sent the library a check for $20.95 to cover the book's cost. This may sound crazy, and there are those who believe Ms. Karkos is a nut case, but there was method to her madness. This was an act of civil disobedience, a protest against the library's offering a copy of the ironically titled, It's Perfectly Normal. It turns out that this book is not a tongue-in-cheek biography of Ms. Karkos, but is subtitled Changing Bodies, Growing Up, Sex and Sexual Health. This book is about sex, a subject Ms. Karkos believes to be inappropriate for public consumption, especially in a place frequented by children (presuming children go to libraries any more). Actually, why would children go to libraries to learn about sex when they can get an unlimited education on their television sets and computer screens? Ms. Karkos is as clueless about the real world today as she is about sex.

Ms. Karkos' arguments are what would be expected -- the book is part of a conspiracy to harm children, causing bad behavior and subjecting them to terrible diseases. Her protest is one we might expect to see in the Bible belt, though it is unusual to see it arise in Maine, where the state motto is "mind your own damn business." Ms. Karkos had earlier attempted to get the police to remove the book from the library on obscenity grounds, but they found no cause. Now, she is scheduled to go to trial in May for her self-appointed police work. Of course, the result of this incident is a sudden surge of interest in this 1993 book.

We see this as an opportunity for the library to take advantage of its superior knowledge of the technological world. Ms. Karkos sent them a check for $20.95, presumably the cost of a new book, but you can go to Abebooks and find lots of copies for as low as $1. If they can keep filling their shelves at $1 a copy and get Ms. Karkos to buy them for $20.95, the library can go into the bookselling business. There's nothing wrong with a 2,000% mark-up. A few booksellers actually survive on less.

The presidential election is bringing old books written by the candidates to the forefront. Collectors are placing their bets. First editions, particularly signed ones, by the eventual winner can be anticipated to bring a healthy profit. Of course, bet on the wrong horse, and all but one of these horses is a wrong one, and you may be stuck reading the thing.

The odds in this gamble took a dramatic swing after the Iowa caucuses when Barack Obama suddenly surged to the top. AbeBooks noted that signed copies of his autobiography, Dreams from My Father, recently sold for $1,798 and $1,299. This one is particularly collectible as it is not a typical written-for-the-campaign book. It was published back in 1995, when people still thought Barack Obama was an obscure Irishman with a funny first name, like "Paddy."