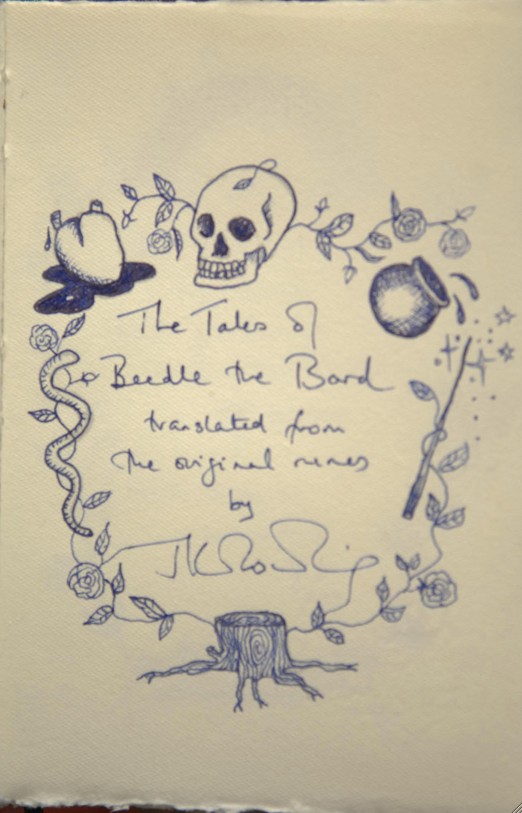 We have come to expect that some books will sell at auction for well beyond their estimates. Sometimes an auction house may not appreciate the book's importance, at other times bidders can simply get caught up in the excitement of the moment. However, what occurred at Sotheby's December 13 was truly astounding. A book, rare (by design), though certainly not antiquarian, sold for forty times the high estimate. That high estimate was no bargain basement price either. Estimated to sell for $60,000-$100,000, a handwritten work by billionaire author J.K. Rowling, of Harry Potter fame, sold for an astonishing £1,950,000, or approximately $4 million. If I were her, I'd have my pen in hand right now, writing another, but when you are already a billionaire, who needs another $4 million?

The book's title is Tales of Beedle the Bard. It is not a Harry Potter book, but fits the same mystical, magical genre. Rowling handwrote seven copies of this book, but only one was placed up for sale. The other six are going to unnamed persons associated with the Potter saga. One can only expect that in time, and depending upon the financial needs of the six lucky recipients (who must be overjoyed by the results of this auction), these other six copies will make it to the market. Perhaps some will be offered in the relatively near future, others maybe not until the owners die and ownership falls to their estates. Eventually, the heirs are more likely to want millions in cash than a book to share amongst them.

The winning bidder was also a surprise. It was not a traditional collector or rare book library of some prestigious institution. The winner was bookselling giant Amazon.com. Amazon has undoubtedly made a great deal of money off Ms. Rowling's books, having sold many millions of them. They could afford it. Still, it is not exactly clear why they would spend so much for this book. They are already providing online reviews of the five stories that make up the book, and have created discussion forums. Perhaps the company feels the publicity and traffic to their site it generates will make it a good business decision. With a market cap of some $35 billion, this is small potatoes to Amazon, almost a transfer of funds from a billionaire 35 times over to a poor woman of just a single billion in wealth (actually, Ms. Rowling donated the proceeds to the Children's Voice Campaign, one of her favorite charities). If Amazon had chosen to distribute the $4 million to its shareholders instead of buying Ms. Rowling's book, the dividend would have amounted to a mere penny a share.

There is one mystery that remains to this story. Who were the other bidders? It was reported that there were five bidders in total, and at least one of them must have followed Amazon to the upper $3 millions before throwing in the towel. Who else was willing to pay such an astronomical amount for a book estimated at $60,000-$100,000? Some people have entirely too much money.