<i>In The News</i>: A Magna Carta, Declaration of Independence, and Elvis Museum For Sale 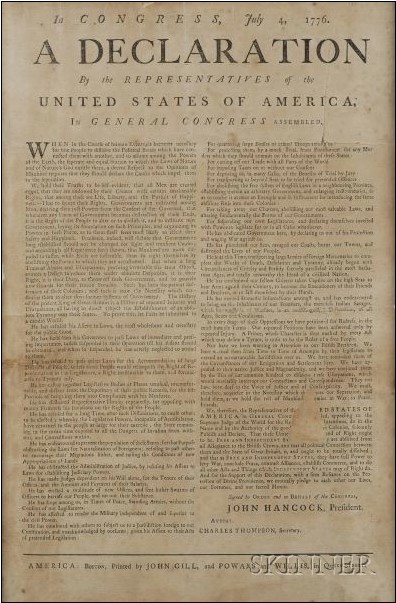 This early copy of the Declaration of Independence sold for $693,500 at a Skinner auction.

Auction sales for two of the most important documents in the history of human liberty top this month's stories In The News. A date has now been set for what auctioneer Sotheby's describes as "the birth certificate of freedom," England's Magna Carta. The sale will be held at 7:00 p.m. on December 18, 2007, at Sotheby's in New York. We recommend you not be late as this is the only lot being offered in this sale.

Offered is one of a handful of manuscript copies of the "Great Charter" produced in the 13th century. This is a 1297 or official version of a document of rights first created in 1215. It is one of only two copies held outside of the U.K. (the other is in Australia). This copy was held for some five centuries by the Brudenell family until sold to Ross Perot's Perot Foundation for $1.5 million in 1983. That will undoubtedly prove to be a bargain as this sale is expected to smash all records for items in the books and manuscripts field. The price estimate is an astounding $20-$30 million.

The Magna Carta will be available for viewing at Sotheby's daily beginning on December 7. Sotheby's has prepared an extensive, 56-page report on the Magna Carta, which will be of note to anyone interested in this great document, even if you do not prove to be the winning bidder. It is available at http://www.sothebys.com/app/paddleReg/paddlereg.do?dispatch=eventDetails&event_id=28596 (Click the link under "Overview" to download a copy).

The other enormously important document to come up for auction was a very early broadside printing of the Declaration of Independence. This copy was printed in Boston less than two weeks after the original document was signed, between July 12 and 16, 1776. It was offered by Skinner in Boston on November 19. Against a modest estimate of $70,000-$90,000, it sold for $693,500. Though a fair number of these broadsides were printed along the eastern seaboard in the days after the signing, the heavy handling and fragility of the paper destroyed most. Fewer than 100 are believed to survive.

A disappointing art sale at Sotheby's led to a huge decline in the company's stock price, and may have signaled caution to high end book buyers as well. The sale was of modern and impressionist art, and it took in $270 million against an estimate range of $355 to $494 million. Almost half of the items sold either below the low estimate or failed to sell at all. A Van Gogh, estimated at $28-$35 million, painted two weeks before he died, failed to sell. The same was true of a Picasso estimated at $25-$35 million (we are expected to pay more for another Picasso than a 13th century Magna Carta? What is wrong with us?). Punishment in the marketplace was swift and brutal, as investors cut almost one-third off Sotheby's stock price the following day.