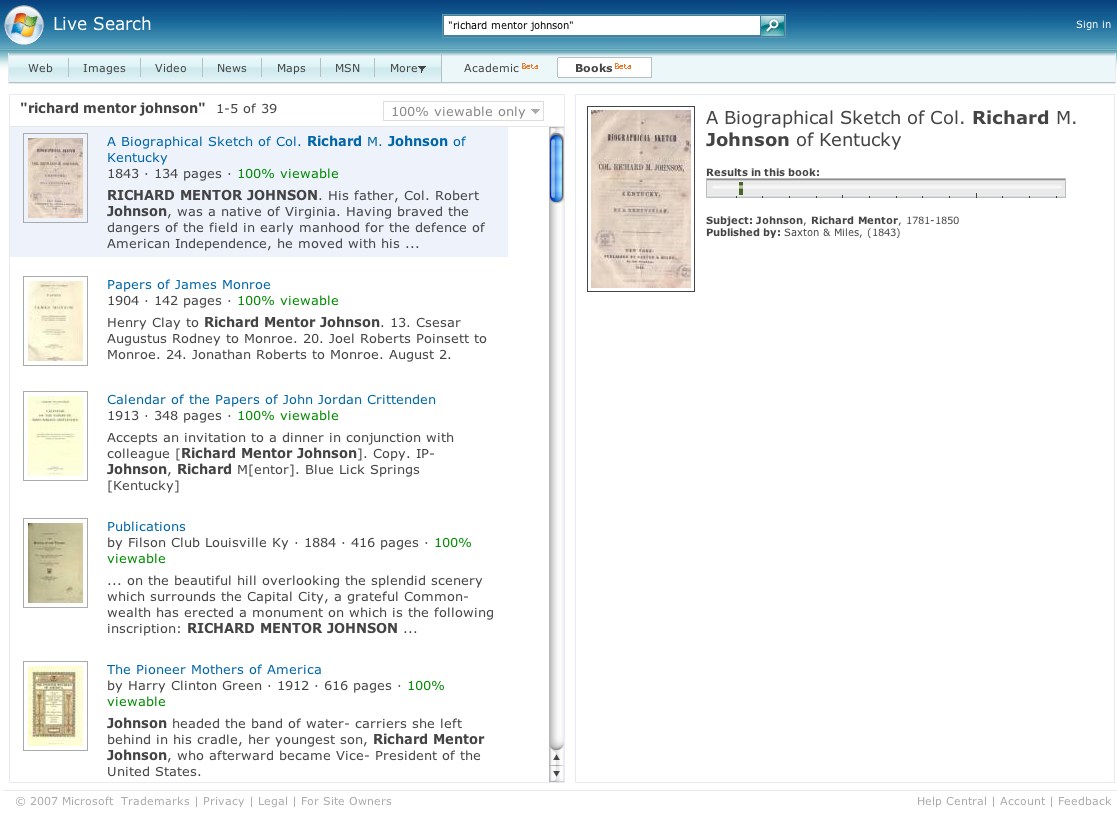 There is a huge battle for internet dominance going on behind the scenes, and while this is not generally a subject for an antiquarian book site, it is showing up even in our field of play. In a strange reversal of roles, Microsoft is the upstart company, while Google is the dominant power. You may not have even noticed it, as Microsoft seems to be making a stealth attack (although Google surely hasn't missed it). Quietly, with surprisingly little fanfare, Microsoft has been building services similar to those offered by Google. Among them is the one appropriate to our field -- book search. A little under a year ago, Microsoft offered its version (still in beta) of an inside the book type of search -- Live Search Books. This is Microsoft's equivalent to Google Book Search. And if much of this seems ripped off from Google (could it be a Microsoft product if it were not copied from someone else?), it compares quite favorably to Google's offering. A few things are better, a few not as good, and much is similar.

Before we look specifically at the book searches, here is a quick note on what Microsoft has been up to in a most quiet way. Microsoft traditionally offered its search engine as part of its web portal, MSN.com. In other words, internet search was provided among a host of other features, especially the latest news. This is similar to the format built most successfully by Yahoo. Meanwhile, Google was rapidly becoming the leading internet search site through a page that featured search only, a stark page with a search box and not much else. Google's search-only format came to dominate internet search, leaving the internet portal search approach in the dust.

Microsoft has never been one to ignore another's successful formula, so it developed its own stark, search only site -- Live Search. If you go to www.live.com, you will find a search page that looks amazingly like -- surprise -- Google. Not only is the plain search box similar, but above it are an almost identical set of secondary links: "web," "images" "news," "maps" and "more." The only one missing from Google's list, naturally enough, is Gmail, for which Microsoft has substituted MSN. It may not be original, but it certainly is a proven formula. The issue for Microsoft is how do you pull users away from Google by offering essentially the same thing? The answer is not clear, especially since they are not doing much promotion. In the past, they have bundled their versions of software with their dominant computer operating system (Windows), but that got them into legal hot water. Perhaps they will again attempt a similar approach, or will try to reinvent the wheel in a superior model. One thing is clear -- they are not about to concede the internet to Google, no matter how large a lead the latter has built up.

Now it's time to look at Microsoft's Live Search Books. Just as to find Google's Book Search you go to the Google home page and click on "more," you go to the Live.com home page and click on "more." There you will find "Books." To compare Live with Google, I searched for "Richard Mentor Johnson," Martin Van Buren's vice-president. He is significant enough to appear in many books, but sufficiently obscure not to appear in too many. The initial results appear a massive victory, at least in terms of quantity, for Google: 617 matches vs. 61 for Microsoft. However, this reflects a different approach, along with a head start, for Google.