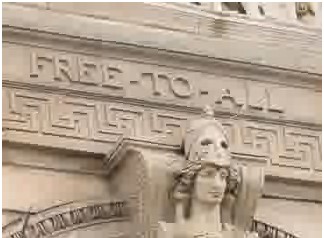 Not all institutions are pleased with Google or Microsoft's massive book scanning projects, and it is not for the reason most frequently raised, copyright violation. Google began a project of digitizing the contents of millions of old, mostly out of copyright books a few years ago. Microsoft has followed suit with its own project. The idea is to make the content of millions of virtually lost and forgotten old books available to everyone everywhere through the internet. However, Google long ago ran into major opposition from book publishers.

While the publishers have raised no objection to the digitizing of out of copyright material (how could they?), Google has gone a step beyond by scanning material that may still be under copyright (all pre-1923 American books are out of copyright, but many later ones may or may not be depending on whether copyrights were renewed in the past). What has upset publishers is the fact that Google will show portions of protected material without first obtaining the copyright holder's permission. Google will remove books if the holder objects, but the publishers believe this is backwards, that permission must be obtained first before Google can display the books. Microsoft, which has been busy launching its own book search, has avoided this objection by scanning only out of copyright books or those for which it has received the copyright holder's permission.

However, we now discover another objection has been raised to the Google and Microsoft projects, and this one comes not from publishers but from libraries. The New York Times, in its October 22 edition, reports that a number of libraries and institutions, including the Boston Public Library, a consortium of research and academic libraries including the Universities of Massachusetts and Connecticut, and the Smithsonian have withheld their books from Google's scanners. Instead, they are making their collections available only to the Open Content Alliance, another organization involved in the digitizing of old books, but unlike Google and Microsoft, a nonprofit association.