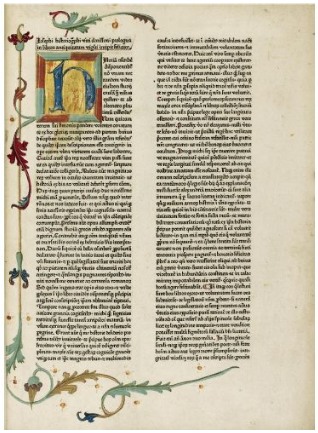 A story recently came out of England that brings an ethical issue no one in the book trade enjoys facing to the forefront. It is a story that may not have bad guys, but it certainly has no good guys either. The issue is the age-old one of what, if anything, can we/should we do when an ignorant owner sells off valuable antiquarian books for a tiny fraction of their worth? One suspects this goes on more than we care to acknowledge, but rarely does it show up quite so starkly. In this case, the seller was a theological library, the buyer a bookseller.

The story begins in 2002 when trustees of the library of the Diocese of Truro conclude that they must make more room on their shelves for new books. This is a working library, not an antiquarian one, and they notice that many of the older tracts rarely if ever are consulted. The centerpiece of these older books is the library of Bishop Henry Phillpotts, donated to the diocese over a century earlier. These may have once been read with awe and reverence, but records indicate no one has looked at any of them in the past ten years. They are taking up space. The logical choice, for a working library, is to clear them away to make room for the new. So far all is well.

Next, the library begins the process of finding a buyer. Here is where it all goes wrong. Evidently, neither the trustees nor librarian have any idea as to what they might be worth. Essentially, they look like too many shelves of old religious books, and in general, such titles are not among the more valuable. The library apparently asks around, and places a small notice in the publication of the ABA (England's Antiquarian Booksellers Association). However, this note mentions only that they are seeking an appraisal for insurance purposes. Reportedly, three ABA booksellers responded, but the library never followed through.

Some time later, three other booksellers offer bids. It is not clear how these particular sellers became aware of the library, but few, if any others ever knew of the planned sale. The highest bid comes from London dealer John Thornton, a specialist in theological books. He bids £35,000 in 2004 (Americans – double the number of English pounds for an approximate U.S. equivalent). Runner up is said to be £20,000. Again, the library does little follow up. In 2006, Thornton comes back and ups his bid, ever so slightly, to £36,000. At this point, the library is getting tired of housing all of these old books and apparently wants very much to be rid of them. It also appears that they think that this bid must be fair since neither of the other dealers offered nearly so much. The bid is accepted.

You can see where this is going. That fall, Thornton carts away the books, three van loads. Next, some of these books start showing up at auction, first Dominic Winter, later Sotheby's. It becomes clear that Thornton has done quite well for himself.