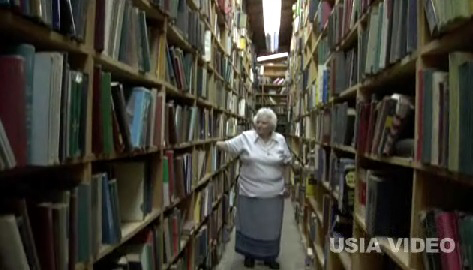 Available: a life with books.

On October 6th the remaining stock of Zobel Book Service, a specialist in scholarly and out-of-print materials, will be sold at auction in Kingston, New York by JMW Auction Gallery. The auction will be simulcast on eBay. Their entire 90,000 item inventory will be sold as a single lot. The opening bid will be $1,000 with no reserve. For 66 years Zobel has provided material to thousands of students, educators and collectors.

The imprint dates span most of the 20th century. Almost every "ology" is represented. Psychology, sociology, education, some technical books, medical books, mathematics, history, literature, some law books, and a large dose of miscellaneous generally describe the stock.

Zobel was founded in the early 1940's in upper Manhattan by David Zobel and in 1960 relocated to Ulster County in upstate New York. In New York City the business was walk-in retail. In the country it became mail order. In the 1960's the firm issued as many as two catalogues a month and continued to issue catalogues periodically. Mr. Zobel died in 1990.

In the years following his death his wife and long time partner Miriam, with the help of their son, continued to issue catalogues and to conduct the business as Mr. Zobel had. "These were his books, his ideas and formulation of what comprised a valuable life and I sought to honor his memory by continuing his enterprise" Mrs. Zobel recently explained. She did this for ten years. Turning 71 in 2000, she issued their last catalogue and set about the serious business of wrapping up a sprawling book business that is, as book businesses often are, as orderly as dandelion seeds cast into the wind. And so for the past seven years she has focused on sales rather than accumulation. The inventory, that once approached 200,000 volumes, is now estimated at 90,000 books. It is this material that will be sold on October 6th as a single lot. The terms of sale require the buyer to take possession within 45 days.

At 78, Mrs. Zobel is looking forward to the day when the last of the books have gone on to new places, perhaps to a dealer or collector.

A link is provided to a video narrated by Miriam Zobel and created by Robert Fagan of New Paltz which shows and describes the material. [link to video]

A second link is provided to JMW Auction Gallery which will conduct the sale. [link to JMW]

A third link is provided to the description of the lot. [link to lot description]

Those wishing to view the material in person are encouraged to contact Miriam Zobel by phone, 845.883.7426, or email, zobelbook@optonline.net, for information or to arrange an appointment. Zobel Books is located in Clintondale, New York, 4 miles from Exit 18 at New Paltz on the New York State Thruway.