The Passing of the Second Bookend: Madeleine Stern Dies at 95 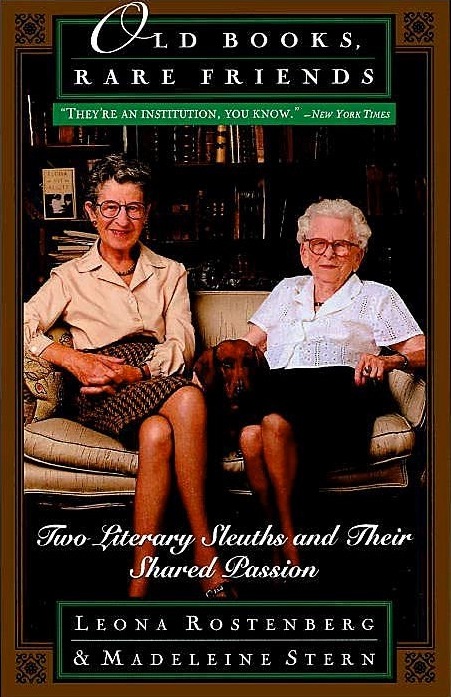 The other half of New York's most famous "bookends" passed away two weeks ago, bringing a close to an era and a story never to be repeated. Longtime bookseller Madeleine Stern, partner in Manhattan's Rostenberg and Stern Rare Books, died on Saturday, August 18, 2007 at the age of 95. Her partner, Leona Rostenberg, died in 2005 at 96. We don't know whether there is a connection between antiquarian books and long life, but we certainly hope so.

This bookselling story began in the 1930s, when Rostenberg and Stern were fellow students and friends at Columbia University. In 1939, Ms. Rostenberg, her studies never quite completed, took a job as an assistant to bookseller Herbert Reichner, an Austrian who had fled a Europe on the cusp of war. He was apparently a great educator, but hard taskmaster as well. In 1944, Ms. Rostenberg, aided by a loan from Ms. Stern, set out on her own. A year later, "Mady" Stern would join her in the business, beginning the partnership that would endure for another sixty years.

They spent the following decades selling books while tracking down antiquarian works for their stock on European and American trips. Neither ever became a major collector, but their love for the books that passed through their hands was evident. Perhaps it was the search, the sleuthing for books they loved most. They became known as the "Holmes and Watson" of bookselling. However, the detective work was not limited to finding hard copies of books. They also delved into research, and may well be best remembered for uncovering the unknown works of Louisa May Alcott. Alcott is known for her Little Women and more literary novels, but she also pseudonymously published sensationalist fare to help pay the bills. It was Rostenberg and Stern who discovered and revealed to the world the other half of Alcott's writings.

It's interesting to note that the partners were in business even before AB Bookman's Weekly, the major facilitator of dealer-to-dealer sales for half a century, began publishing in the late 1940s, and were still going strong when the internet forced that publication out of business. They prospered through the closing years of bookselling's first 500 years, to become participants in the dawn of what is undoubtedly the most dramatic change the trade has ever experienced, the internet era. Of course, these two pioneers were nearing age 90 by this time, so they mostly stuck to the old ways of doing business as the third millennium began.

Here are two more things for which Ms. Stern will be remembered. She and Ms. Rostenberg were both writers, and they collaborated on many books, both about their own careers, and the tracking down of Alcott's hidden treasures. In a PBS interview a few years back, Ms. Stern noted that booksellers become "ghosts" when they pass on, as little is written by or about them, "unless he wrote books." Ms. Stern will never be a "ghost." Secondly, they were pioneering feminists. Perhaps they were not the sort of feminists who demonstrate in the streets, but the type who simply go out and do what women were not supposed to do.