<i>Bookends</i>: A Play About Two Booksellers 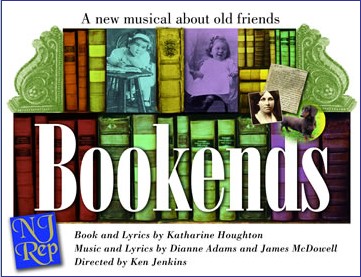 Bookends is being performed by the New Jersey Repertory Company.

It's not often that booksellers become the subject of a theatrical play, and a musical no less, so the production of Bookends by the New Jersey Repertory Company deserves a mention. It is the story of Leona Rostenberg and Madeline Stern, lifelong friends, and almost as long partners. Ms. Rostenberg began her work in the book trade, as well as scholarly research, in the 1930s. In 1944, she and childhood friend Stern formed their bookselling partnership, and it lasted over 60 years, until her death at 96 in 2005. Ms. Stern, 95, survives.

What makes their story remarkable is they were women, conducting an important book business in a time when women did not do things of this sort. It seems odd today that this would have been an issue, but it was huge at the time. Women were supposed to keep house, or if more daring, perhaps be a schoolteacher or nurse. Running a business like Rostenberg and Stern in the heart of New York was beyond exceptional. The fact that they kept this business going until each was in her 90s just adds to the wonder of this story. They are worthy of the honor.

The writer of this play and lyrics to the songs is an individual people who grew up in the 1960s will remember, even if her name is less clear. Bookends was written by Katharine Houghton. If you don't recall the name, she was one of the four stars, along with Spencer Tracy, Katharine Hepburn (her aunt for whom she was named), and Sidney Poitier, all names you do recall, in Guess Who's Coming to Dinner. Ms. Houghton played Tracy and Hepburn's daughter, who brings home Poitier, her fiancée, who, to her parents' dismay, is a black man. The situation tests the liberal, tolerant values of her parents, in an era when such a relationship was shocking, even illegal in some states. Ms. Houghton slipped from the limelight after this film, preferring to devote her life to the stage and playwriting, rather than the greater fame of Hollywood.

The play received something less than an enthusiastic review from Newark Star-Ledger reviewer Peter Filichia. While acknowledging the accomplishments of Rostenberg, first female President of the ABAA, and Stern for developing the antiquarian book fair, he then claims, "...the best musicals involve Big Characters and Big Events. Buying and selling books can't compare to Joan's reclaiming Orleans for the French, or Anthony and Stanton's battles for women's rights." Here he is referring to Joan of Arc, Susan B. Anthony, and Elizabeth Cady Stanton, who are mentioned in the play. This comment, of course, simply displays Filichia's own misplaced sense of priorities. He then says that these women's struggle in what was then a man's world might have had some appeal to audiences in the 1960s, but is stale today. Pens Filichia, "The irony is, though, that this musical about antiquarian book sellers fails because it tries to sell its audience a book that feels antiquated." Perhaps, but what could be more tired a subject than New Jersey gangsters, but the Sopranos didn't seem to have much trouble finding success.

Bookends will be running through August 26 at the New Jersey Repertory Company theater in Long Branch, New Jersey. I'm sorry I live thousands of miles away, as I would have liked the chance to make my own judgment about this play on these two pioneering booksellers.